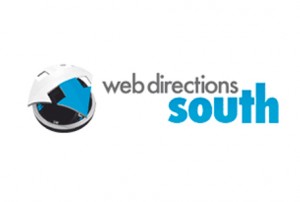 Eleven years. John Allsopp tries to convince that this is the 10th anniversary of my favourite web conference, but there have already been ten (including Web Essentials 04 and 05), so this is the eleventh. In its second change of venue (originally UTS, then Darling Harbour), Web Directions has relocated to the Seymour Centre.

A venue change like this is no small thing, but John and his retiring (literally!) colleague Maxine know how to take care of the details. Probably the only negative I could mention is the lack of space when everyone is trying to find a place to balance their plates, but even that is a minor quibble.

It helps (for me) that I know the centre inside out. I’ve worked in all its theatres, either as a performer or a stagehand. Let’s just saying hanging lights here is, um, exciting (they probably have better techniques these days).

So, to the now-expected Opening Sequence. This is a showpiece meant to demonstrate some of what can be done in the browser. This year’s creators, Reactive, did a fine job although personally I thought the “crash” (sudden halt in proceedings with the screen saying the internet connection was broken, ha ha, only joking) wasn’t such a great idea.

To me, it smacked of being unfamiliar with the audience. For those of us who’ve been working on the web for a while, this kind of joke is a bit of a tired cliché. Call me a grumpy old so-and-so, but I see enough of this in real life. But, onwards!

I’m a big fan of Matt Webb. His presentation in Vancouver in 2008 was a humdinger. This talk was in a similar vein, rambling across his ideas about how humans connect, how machines connect and how the two groups connect to each other. His evocation of seeing and tweeting about a stuffed dog at Slough railway station, only to have the dog tweet back to him, is very nearly the perfect Twitter anecdote. Twitter was made to allow dead dogs to compliment your shoes. Matt’s point was how objects are now talking to us.

In Vancouver, Matt’s rambling seemed almost revolutionary, talking about Sumerian writing, Babylonian architecture, 17th century town planning, the effect of printers and radios on communities – almost anything except “the web”. In 2014, when Webb talks about 1960s ideas about the future, it’s perfectly in synch with current discussions about the Internet of Things. It turned out that this was setting the tone for all of WD14, or at least the first day of it. This conference is not about browsers, PCs, laptops – it’s about the changing role of the internet in our daily lives.

Possibly the most telling moment in Matt’s talk was when he showed a video of kittens falling off a robo-vacuum (hey sure, I shared it on Twitter, too). He kept talking over the top of it as the audience of web professionals giggled, but was right on the money when he said, “You haven’t heard a word I’ve said, have you?” The implications of this moment may run deeper than just a throwaway line.

Scott is another returning speaker to WD. Last time, he came flushed with the extraordinary success of his involvement with the campaign to elect Barack Obama President of the USA. What made this extraordinary was the role that good design played in bringing voters on board with Obama, and Scott was the driving force behind those design principles. It was also a great example of a job where the budget was sizable enough, the scope of the project, the range and size of the target audience and – importantly – what was at stake – was of sufficient magnitude that the design requirements probably carried more weight than in any public campaign before it.

The big, huge, humungous question is, of course, “How do you follow that up?” Scott came down by Kickstarting a book about the campaign, which proved another huge success. He has worked on a lot of other projects for very high profile companies – among the biggest in the world – with continued success. He also started the Noun Project, documenting icons and visual figures to make up “the world’s visual language”.

At WD14, Scott talked about his approach to web work, summed up in the title of his presentation. Simplicity and Honesty are not always easy to achieve, but they are the forces that drive Scott. His priority is – and this may be the result of being the figurehead of such successful work with Obama, Fast, Apple, Nike, IBM et al – to share the load. He talked about teamwork, about democratic decision-making, about trust (in yourself, in your colleagues and in your audience), about testing, and maybe most significantly about iteration. Don’t be afraid to change things in response to testing. Be the conduit for development. Take in all perspectives and comments.

I found myself wondering how the mechanics of this might change according to whether you are (like me) a one-man band freelancer, or a two person partnership, or the head of a small company, or the a cog in the wheel of a large company. Very interesting stuff, this had me pondering a lot of things.

Having decided to stay in the York Theatre for the day and follow the Product track (not entirely sure what that means, but I think it’s about visual design, content strategy, the end output of the development process – whereas the Engineering track focuses on the mechanics of the development process itself), my next session was with Younghee Jung, an interaction designer. Her talk focused on user research and usability.

Managing the process of user research can be tricky, taking into account the quirks and foibles of the participants, avoiding conclusions that fit the data but for the wrong reasons, collating the data so that it can be properly assessed, and finding ways to collect and understand user research gathered in less than formal situations – in other words, anecdotal observations, which can be more telling than structured feedback in a testing environment.

This was good, solid stuff leading us to not take anything for granted when it comes to user research but to always be alert and receptive to what might be influential.

The after lunch speaker in the Product Track was Erin Moore, a Senior UX Deisgner at Twitter. As the Beef Rendang settled inside me, Erin talked first about time, how our perceptions of it are informed and to some extent controlled by our methods for tracking it and talking about it. Clocks do not define time, and the experience of time passing is much more personal and flexible than our measurement systems imply.

We had the time of our lives. I’m having a hard time of it. The body clock.

The title of her talk referred to the idea that time being linear and structured is a falsehood that is convenient for us – in some ways. Moore brought this back to product design by suggesting that we pay more attention to how product users perceive time and what we can do to design better products as a result.

Again, the context was focused as much on web-enabled products and servicxes as on the web-specific, and the overall feel was that of attention to ideas and concepts rather than the mechanics of implementation. I see this as an acknowledgement of the advancement of our industry, that we assume the practical capabilities.

Tom Armitage: Some of these things are not like the others

Tom Armitage’s presentation took the Internet of Things theme ever further, as he talked about his experiences working on connecting things via the internet, the perceptions people have of these connections and how they can be improved to make the things more useful to the people. A bridge that tells you when it opens, bus stops that tell you when the bus you want is coming (or don’t), a hired bike that tells you the nearest place you can drop it off. And, of course, the epic fails that can make the whole thing seem like a joke.

Armitage separated this from the more flashy internet-enabled whitegoods that have become the poster items for the IoT, to focus on things that are more commonly used in a public, shared fashion. Again, the over-arching imperative was that we should think more about what networking and connectedness means, even while we’re busily networking and connecting all these things to people, and people to ech other.

Dan Hon: An internet for humans, too

Day One’s closing keynote was delivered by Dan Hon, a “recovered” lawyer who became a game designer, creative director and now Content Director for a project to “show that governemt can work for the people”. Dan was a good choice to finish the first day, as he drew together threads touched on by just about all the other speakers. The thematic overlap extended to using some of the same, or similar, examples in his slides amnd comments.

What made it a great closer, though, was that while the other speakers were clearly passionate about their work, Dan was openly emotional. Emotion was referred to by several speakers, but Dan was the only one who took it further than just kind-of-comical comments and images. The importance of user research becomes a little pointier when put in the context of people trying to manage the affairs of deceased family members. The sometimes overbearing nature of Facebook takes on a different shade when used to gather support for a woman dealing with cancer. And he wasn’t afraid to refer to his own family when talking about this.

Good on you, Dan, for bringing this to a web conference stage. This is the kind of context we as web professionals absolutely need to have in mind. We, the people who connect people to things via the internet, should stay focused on the people, not the things.

Dan also talked about user experience in general on the web, but I felt some of his points were a little blunt here. The US phone provider AT&T demands a written letter in order to disconnect a service. How old-fashioned! Who even sends letters, any more? Well, it seems to me entirely expected that the provider of a carriage service with all its legislated requirements that predate the web would use paper forms and signatures. Dropbox doesn’t do that because it is an entirely virtual service and postdates the handwritten signature as a form of identification.

This is all part of the evolution we are undergoing, but it’s pointless to rail against those who are slow to catch up. The rule changes required take time to be even understood, let alone implemented. But his ultimate point was fair, that we should be using the web to make our lives easier rather than creating further obstacles to people living their lives.

So, that’s Day One. Let’s see what Day Two has in store.