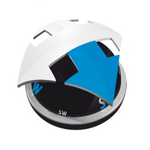 For various reasons, I was only able to take in three sessions from the second day of Web Directions 2014 (you can read my thoughts on Day One here).

Those three sessions did reveal, though, that the focus on the human side of the web, on connectedness and on the social context of the web continued on from Day One.

This was the surprise packet of the conference, for me. Johnny Mack is a Seattle-based designer working for Google. In his talk, Johnny focused on teamwork and trust, based on his own experiences both with his main project and a more personal side project. It’s to his great credit that, while he may not be as flashy or self-assured a presenter as some of the others he shared the stage with, what he had to say was as deeply important as anyone.

Both Johnny and the audience loosened up after he referred to “those assholes” about ten minutes in, but in any case in a funny kind of way I suspect many audience members could more easily identify with him than with some of the other “performers”.

Johnny related how his own assumptions and expectations changed after he came across Bruce Tuckman’s 1965 description of group dynamics as moving through a series of stages he called “forming, storming, norming and performing”. Initially skeptical, he soon saw the truth of this as the groups he worked with went through those stages.

Along the way, he came to see the critical value of clear and honest communication; an organised approach and the power of – and need for – trust. Johnny brought in reference points from music producer Rick Rubin and alternative musician Nick Cave, and took the audience along with him as explored how trust can create a truly collaborative environment.

Even though I’m a freelancer and a one-man-band, I took a great deal out of this presentation, and Johnny’s understated delivery did much to ensure that.

Jonathon could hardly be more of a contrast to Johnny. Loud, brash, kinetic and demanding of his audience, Jonathon used all of the stage (and some of the aisles), had us standing up to demonstrate a point and used, by his count, 127 slides in his presentation.

He referred to quotes from industry pundits on the topic (I particularly liked Kristina Halvorson’s 2008 comment that “Content strategy plans for the creation, publication, and governance of useful, usable content”) and suggested that what information architecture is to design, content strategy is to copywriting (which I think Rachel Lovinger suggested in 2007).

Jonathon explained what constitutes content on Facebook (not just user-generated content), talked us through how Facebook is seeking to hone the messages it gives to its users, the facilities it provides and the context within which it operates. I would have to say that my experience of how Facebook implements these principles doesn’t always match Jonathon’s lofty ideals, but I do accept he is intent on improving that situation.

Ultimately, what I took away from this presentation was the need for those of us who shape what the web is to accept the responsibility for understanding how people use what we build, what they want to be able to do with it and why any of this matters. I was deeply impressed by his repeated emphasis on us all developing and maintaining empathy with our end users.

Doug Bowman: A voice for everyone

This was, for me, a bellwether presentation (a bellwether is a sheep that wears a bell so that other sheep will follow, keeping the flock together).

Back in 2004, at the Web Essentials conference that would evolve into Web Directions within a couple of years, Doug Bowman was the speaker I was most excited about. The man who invented Sliding Doors! Dave Shea of CSS Zen Garden had been on stage hand coding in front of a live audience, Russ Weakley showed how to make images responsive (although I don’t think that term was used), while Joe Clark, Bruce Maguire and Roger Hudson ensured that accessibility was embedded as part of any standards-based approach to web design. What revelations would Doug bring to the stage?

What he spoke about in 2004 was social responsibility. As leaders and implementers of a tech revolution revolving around the internet, it was up to us to keep the focus on usefulness and relevance to the end users, the people who would use this Web. Maybe there were some there that day who were disappointed that we didn’t get a bunch of technical tips, but I nearly cried to hear this man talk about why what we were doing was important, and how we could and should let ourselves be informed by real world concerns.

So, in 2014, what would Doug – who had in the intervening time worked with Google, Blogger, Adaptive Path and more, and had been Creative Director with Twitter (!) for the past five years – bring to the Web Directions stage?

Well, this time he did make me cry.

He spoke of the human value of Twitter, of its unique position in our lives – not as technical wonder, but as way of connecting people. He gave examples of how ordinary people could connect with their idols, how service providers and product vendors could connect with their customers, how negative feedback could become positive through direct communication, how a journalist imprisoned in a foreign country could be given hope and support, how a young girl could lead a worldwide campaign to stop child slavery.

Oh yeah, I cried. And I smiled to think that, yes, I’m a part of what makes that happen.

This is what I go to conferences for. Not the techy tips and tricks (although I’ll happily take those on board), not to find out which app will take off next, not to see which web venture has made it big.

I go for inspiration. That’s what Web Directions has always given, and that’s what WD14 delivered, in spades. We’re grown up enough now to know that web design is about much more than ones and zeroes, design aesthetics, copywriting, Photoshop, WordPress, HTML, JavaScript and CSS. It’s not even about standards, accessibility, legacy or future-proofing.

The web – and our work – is pointless if it’s not about people. Empathy. Connectedness. Experience. Usability. Strategy. A better world.

I’m told that Web Directions never sets out to follow a specific theme, they just look for speakers who touch on current topics in our industry. This year, the conference (or, at least, the Production track) was overwhelmingly about context. Each presenter spoke about the “why” of what they (and we) do, and how this must inform the “what” and the “how”. There is a big picture, and it requires us to accept responsibility for what we do, and to push ourselves to be in the service of our clients and our end users.

I wish I’d been able to see all the speakers (and I haven’t even mentioned the Engineering track – a whole nother kettle of code), but I certainly didn’t leave WD14 empty-handed, or empty-brained. I’m not sure I could have packed much more in.