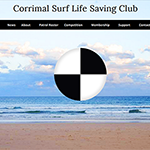 Half way through September, I received the call to build a site that I’d been hoping to build for several years.

In 2008, when my kids joined the local surf life saving club as Juniors in order to participate in their Nippers program teaching watercraft and beach safety, I let myself be volunteered to take over the existing website.

I redesigned it and maintain it on a pro bono basis, not least as a way of thanking the volunteers who actually run Nippers for their tireless enthusiasm every Sunday from Spring to Autumn.

I was aware that there was another website for the Seniors part of the club, and that it was in need of some development. During the intervening years, the Nippers site became the de facto site for the club, linked to as the contact point.

This year, finally, I landed the job of designing a new website for the Seniors – at a discount rate, but still, as a paid job.

Naturally, as these things go, it turned out to be a case of getting everything done in 10 days.

Having worked with the Canvas theme half a dozen times now, I’ve realised that its responsive qualities work best when you really plan how your content will look on the various devices and screen sizes.

I’m pretty happy with how the Corrimal Surf Life Saving Club website displays in just about every context I could conjure up.

In terms of the desired functionality, the find for me was the Calendar plugin by Kieran O’Shea: it’s a good one.