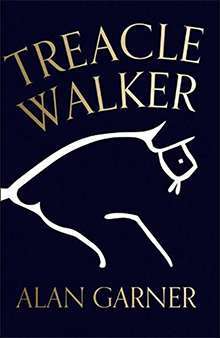 It’s so good to be back in the world of Alan Garner.

Its language is riddled with ancient words for ancient things, word pictures of myth, magic, folklore and fairy tales. When Garner’s characters speak, which isn’t often or for very long, they might speak in a Cheshire dialect incomprehensible to even near neighbours.

Garner’s is a world animated and driven by children, young enough to see things their elders can’t, won’t or have forgotten. Young enough to connect with the very old. I’ve never thought of Garner as a children’s writer, though – he writes books for all ages, usually featuring young people as the major characters.

Skip this bit, jump to the review.

The first Alan Garner book I read was The Owl Service (1967), a powerful evocation of ancient Welsh legend played out among young people in modern times. I then went back to read Elidor (1965), a clever and engaging multi time and place adventure for a group of children, then The Weirdstone of Brisingamen (1960) and its sequel The Moon of Gomrath (1963). These books put Garner on a shelf with CS Lewis’ Narnia stories and other fantasy adventures for young people.

And then came Red Shift (1973), a book I still re-read every few years. Three stories are set in the same Cheshire locale: one in the present, one during the English Civil War and the other in Roman times. The events in these lives are interconnected by a few common objects and places and Garner’s interweaving of the stories. More sparse in its writing than previous books, Garner stopped describing the physical environment in detail and let readers work it out from the words and thoughts of the characters. Throw in the dialects, contemporary vernacular, Shakespearean and astronomical references and you have a book that deserves its common description as “demanding”. I love it. If I had to name a single book that is my all-time favourite, it would be Red Shift.

I seem to remember that after Red Shift, Garner shut himself away for a while, dealing with something close to a mental breakdown. Given the effect Red Shift had on me, I’m not a bit surprised. When he returned to fiction with The Stone Book Quartet (1976-1978), his writing was different. Still set around Alderley Edge, still drenched in local language and stories (and personal history), there was less magical fantasy, more grounded spirituality.

His work of the 1980s was mostly short stories and both collections and rewritings of fairy tales and folklore.

And then he shook me up again with Strandloper (1996). It was based on a true story of a Cheshire man transported to Australia in the early 19th century who escaped and lived with indigenous people for 30 years. Garner has William Buckley, who has become a shaman and leader of an indigenous tribe, return to England after he fails to prevent the tribe’s massacre. The depiction of Australia’s First Nations people is the weakest part of this book, while the strongest is its evocative wordplay across many distinct languages, dialects, jargon and accents. Its core conceit, that a culture can be identified and transplanted to another part of the world is problematic, at best.

In Thursbitch (2003), Garner went back to interweaving stories and interlinking lives across time but within his chosen locale. The two intertwined stories here focus on an 18th century salt trader and a 21st century couple and they nearly kind of almost cross over physically. It’s about how we’re separated and joined by time, and how flexible a concept it is.

Boneland (2012) was a further sequel to The Weirdstone of Brisingamen and The Moon of Gomrath, 50 years later. A boy from the earlier books is now an adult but unable to remember anything from the age of 13 back, including his adventures. This time, as his memories are recovered, Garner works in a counterpoint story that goes back to the Stone Age. This felt, at the time, like a rounding off, perhaps a closure to Garner’s writing career.

Not many people were expecting Where Shall We Run To? (2018), a memoir of Garner’s life during wartime. I’ve yet to read it.

And now we have Treacle Walker (2021), for which Garner was nominated for the 2022 Booker Prize.

The outline of the story is that a boy called Joe lives alone in a house where he reads comics, plays with his marbles and collects birds’ eggs. A rag and bone man called Treacle Walker appears one day and swaps some unlikely items with the boy. From there, the boy meets more strange characters and unusual dream-like events happen to him.

In telling this story, Garner pulls together many of the themes, techniques and tropes he has used over last 60+ years of writing. Little is made plain. Verbal exchanges are brief and characterised by dialect, slang and jargon. Events are narrated in the third person as perceived from the point of the view of Joe, the child, so the reader is limited to Joe’s understanding. What little scene setting there is leaves much unexplained – why is Joe in the house by himself, where is his family, how is he able to go somewhere to get his eyes tested, when is all this even happening?

And this is before we start getting into the magic of swamp people, characters stepping out of comics, mirrors leading to other worlds, multiple selves and eggs that turn into marbles.

This is peak Alan Garner. He makes the reader work. He knows we can Google stuff, and many will, especially if they know Alan Garner. He also knows many people won’t and they’ll let the book wash over them and either enjoy that experience, or not.

For me, this is the Alan Garner who, when he has a character write a love letter to another in Red Shift, has them do so using a specific code invented by Lewis Carroll, and then includes the entire letter – in code – at the back of the book so the reader can have a crack at working it out. It took me ages.

In Treacle Walker, much can be gleaned with a little research. For example, when exactly these events take place is not made explicit. But Joe’s favourite comic is Knockout and his favourite strip is “Stonehenge Kit the Ancient Brit”. This ran from 1939-1950, and Joe seems to have access to a backlog of them, so I’d suggest the story is set just post-WWII. This is both supported by and may help to explain some other things in the book. When Joe has his eyes tested, the man says “Let’s have a shufti”, meaning “Let’s have a look”. That particular word came into general use in the UK from the military during WWII, derived from a Hindi word. It can’t be coincidence that Garner was housebound reading comics as a child with an illness, and he was born in 1934. I’d better read that memoir, now.

But, hang on! Does this mean the reader has to Google their way through the book, looking up old Scottish epithets, Latin expressions, patent medicines, the history of comic books, the nature of certain wood types and the author’s health at various ages? Um … no, you don’t have to. Only if you want to make sense of the story and you’re not a polymath with an encyclopaedic knowledge of pretty much everything.

Let me be clear, I would not do this for many writers. Maybe Thomas Pynchon and David Foster Wallace (although he tended to footnote everything you wanted to look up).

For me, Treacle Walker is Garner at his best. It’s a fairly simple story, deliberately told in such a way that it looks far more complicated than it is. Garner uses the poetry of language to obfuscate even as he reaches for an elemental truth.

You don’t have to look up every reference. You can just enjoy the language and the story for whatever it brings you. What I can tell you is that every line, phrase and word in this book is carefully chosen and entirely deliberate. All the references are intentional. And looking up those references enhances the story and helps me understand what’s going on.

It’s like when I tried to read The Brothers Karamazov. I didn’t know how to pronounce the Russian names so I just kind of bleeped over them. It worked, except I had no idea who anyone was.

Another brief example from Treacle Walker. There is a character called Thin Amren, the aforementioned swamp creature accidentally awakened by Joe. Dig a little, and you find that “thin” is an ancient Irish concept of the places where the physical world and the intangible, unseen world come closest to meeting. And while Amren is a particularly vengeful angel from the Old Testament, Amren the Tall was the son of Bedwyr, or Bedivere, a knight of the Round Table, and was himself an attendant to King Arthur. And Thin Amren has to be pinned down by Joe, forcibly submerged. Draw your own conclusions, but this isn’t just trivia, it affects understanding of the story.

So, what do I think is going on in this book? I think this is a fictionalised account of a period in Garner’s childhood when he had a debilitating and scary illness, was left to fend for himself for a while, had to confront some deep seated fears and came out of it having put his childhood behind him and setting out to adulthood.

I also think Treacle Walker is a kind of allegory for England itself, recovering from the damages of WWII, confronting its history and its myths and legends, and reconciling itself to a necessarily more pragmatic and less mystical future, having perhaps lost a certain kind of insight in the process.