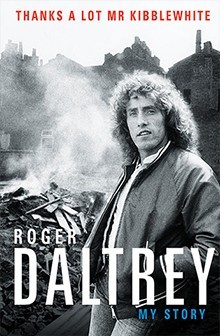 First off, I have to say it was a genuine pleasure to pick up a hardback again, and this one is really well made: has excellent paper quality, well bound, nicely laid out, crisp print – none of this makes a book great but it definitely enhances the reading experience.

The title, predictably, refers to Daltrey’s high school headmaster who, as he expelled him, told 15 year old Roger he would never amount to anything. At the time, he thought “Thanks a lot” in a sarcastic way but by the end of the book (spoiler alert!) he genuinely thanks Mr K for setting him on a path to his brilliant career.

Still sounds bitter to me.

The book is structured around a basic chronology but Daltrey jumps around with anecdotes with the usual “many years later … but all that was yet to come” devices to get back on track. The whole thing is like Roger’s sitting in the pub telling his mates (that’s you) his life story. “Well, what would YOU do, eh?”

To be fair, he’s a very good raconteur and has some fantastic stories to tell. He goes into quite a lot of detail about his bandmates, each of whom has very specific failings that somehow only serve to strengthen the friendship – nay, the BROTHERHOOD, that binds them! His rollicking storytelling style kept me well engaged but my overall impression was that he’s just not a very nice bloke.

He’s explicit about leaving his first wife and child because they would hold back his career and he plays the end-justifies-the-means card as he explains that it was all for the best because he became rich and so was able to support them as promised and they all get along fabulously now. As he does with the several children and their mothers he has scattered around the globe. And his second wife of 30 years, who is still with him.

There’s a fair bit of predictable music industry stuff – inept or corrupt managers and label owners, bad decisions, lucky breaks, it was the 60s/70s/80s/90s, breaking America is hard, drug use (not HIM, of course, those around him) – but probably the most interesting for me is when Daltrey talks bout his approach to singing, how he modified his voice, extended his range, changed his breathing, changed his phrasing – all in the context of figuring out how to be a front man for The Who.

It was also fun comparing Daltrey’s version of certain events to Pete Townshend’s in Who I Am (another who comes across as unlikable in his own autobiography).

All in all, not a waste of time.