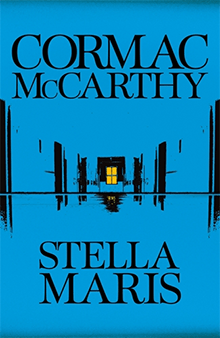 This is the companion novel to The Passenger.

Where the earlier (by a matter of months) book was the story of Bobby Western: salvage diver, former race car driver, son of an atomic bomb scientist and person of interest to government agents – Stella Maris comprises 170 pages of dialogue between Bobby’s sister Alicia and her counsellor at the mental health institution that gives the book its title.

We know from The Passenger that Alicia was seven years younger than Bobby, extremely beautiful, a world class mathematician, university student at 13, the owner and player of a hugely expensive Amati violin, in love with her brother, and visited by some dreamlike creatures when she didn’t take her medications, including a ringleader who had flippers for hands. We also know she was the suicide depicted at the start of The Passenger.

Stella Maris takes place before the events of The Passenger, when Bobby is still in a coma in a European hospital after a racing crash. When this dialogue takes place in 1972, Alicia is 20, has committed herself to Stella Maris, and doesn’t know whether her brother is alive or dead.

When I say “dialogue”, I’m not kidding. The entire book is nothing but dialogue, a transcript of conversations between two people. No surrounding narrative, just the lines, one after the other. Mostly, the characterisation is so crisp that it’s clear who’s speaking, but with McCarthy’s disdain for much punctuation, counsellor Robert Cohen’s habit of repeating much of what Alicia says, and Alicia’s deadpan sarcastic one-liners, it can be hard to keep track.

Which I’m sure is deliberate. In Alicia, McCarthy has a character who is a highly educated and articulate genius / savant who may be autistic, has sophisticated views on the human condition and yet is herself irreparably broken, and he gives her full rein.

Alicia knows a lot about a lot of things, and has opinions on a few more. The approach that Alicia takes with her counsellor is mirrored in McCarthy’s approach to the reader: “Keep up, if you can.” I stopped to look up a lot of words and people, and I had to re-read several passages.

To be clear, nothing happens in Stella Maris. It’s all talk. Some of that talk fills in some details, or at least adds some perspective, to people and events described in The Passenger, and in that sense, there’s some plot development. We do find out more about how Alicia feels about Bobby, for instance, and how far they went toward consummating their incestuous love for each other.

But there is a great deal more literary riffing on what it is to be human. In The Passenger, this kind of expostulation generally took place between Bobby and one of his eccentric friends, typically in a bar or restaurant. In Stella Maris, it all comes from Alicia to the counsellor in a room in an asylum: mathematics, music, language, relationships, physics, psychology, philosophy, synesthesia, quantum mechanics … all the things she knows about and thinks about and talks about.

The more I think about it, I realise that The Passenger – the loss of individuals’ power and control, the inefficiencies of educated thought, how the history of physics brought us the bomb, the inherent entropy of the system, the collective death wish of humanity, the degradation of every political state – was light-hearted compared to Stella Maris.

The overt American-ness of Bobby’s story, set against a backdrop of cities, towns, farms, and country roads across the country, is pared back to a more universally human focus in Alicia’s tale, told in a featureless room with a single window. She covers topics as complex as how the acquisition of language changed the course of human development to Kurt Gödel’s incompleteness theorems. As esoteric as where music comes from. As world-changing as atomic tests observed six miles from ground zero.

All this internal action and intellectual dissection is claustrophobic, though, and it’s really often only the power of McCarthy’s writing that keeps the reader fully engaged.

One of the things McCarthy does in many of his books is swing from very literary, metaphorical, almost poetic flourishes in his descriptions of the world around his characters, to prosaic, clipped, banal descriptions held together by multiple conjunctions. From The Passenger, compare

In the dying light a river like a frayed silver rope. Lakes deep in the stone coulees white with ice. The western mountains burning.

Then he set the pan on the porch steps and got in and started the car and turned on the wipers and backed the car down the drive into the road and turned and headed toward the highway.

But he can’t do that in Stella Maris. Everything is in the voice of one of two characters, constrained by their experiences, limited to their words.

That doesn’t mean it’s dull. When Alicia describes in excruciating physical detail exactly how horrible death by drowning must be, it’s McCarthy bringing all his literary powers to bear. It’s gorgeously written, viscerally evocative, and terrifying to read.

McCarthy, as always, is playful and likes a joke. When discussing the idea of mathematical objects existing independently, Alicia refers to a “shimmering palimpsest of eternal abidement.” It takes a page and a half before counsellor Cohen says, “Abidement? Is that a word?” It’s not (it’s “abidance”), but Alicia explains why it could be.

McCarthy also continues his habit of making up portmanteau words like “spookthink” and “girljuice”. (In each case, what you’re thinking is probably right.)

I think it’s fair to say that Stella Maris doesn’t work as a novel if you haven’t read The Passenger. Not that The Passenger explains what’s happening in Stella Maris, nor that Stella Maris clears up all the mysteries of The Passenger. But you really need Bobby’s story to make sense of Alicia’s. Both books, however, contain passages considering or exploring the human condition that are worth the price of entry alone. Maybe you weren’t expecting to get an explanation of how Kekulé came up with the configuration of the benzene molecule but it’s pretty cool, and it has a contextual relevance.

These often extended ruminations are, in fact, at the heart of both books, or at least their subjects are. In Bobby and Alicia, McCarthy has created two lead characters and a supporting cast that let him graze across the history of everything, the breadth and depth of human experience and knowledge. Interestingly, and gratefully, there’s very little about church, faith and God, other than as a counterpoint to mathematics and science.

For those who thought Stella Maris might clear up the business of the missing passenger in The Passenger, no such luck – not least because those events haven’t happened yet. Plot is not the point of either book, though, other than as a context for observing and commenting on human experience. Where The Passenger ended on a contemplative note, with Bobby a solitary pariah in a stone tower on a Spanish island, Stella Maris ends abruptly with a counselling session coming to an end, and Alicia asking Robert to hold her hand because “that’s what people do when they’re waiting for the end of something.” And we know what happens after that.

I’m not entirely sure what message McCarthy is sending us in The Passenger and Stella Maris, but I’d hazard a guess he’s not too impressed with Western civilisation, particularly how it manifested in the United States in the late 20th century. The one thing he doesn’t do, though, neither through his characters nor a narrative voice, is offer a solution, or resolution, a way forward or out. There’s no Fortinbras to come in at the end to sweep away Denmark’s decadent old court.

Ultimately, if people as intelligent, talented, educated, articulate, well-resourced and American as Bobby and Alicia Western end up as they do, let alone all the other characters who live (and die) unfulfilled lives in the two books, what hope is there for the rest of us?