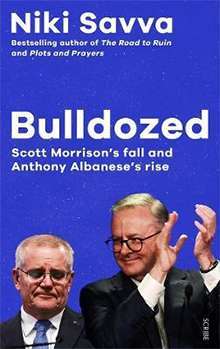 I very much looked forward to reading this over Christmas, but I have to say I was a bit disappointed.

Perhaps I should start by saying I wasn’t aware this is the third book in a trilogy about the Liberal National Government of Australia from 2013-2022 (although probably not planned as a trilogy). The Road to Ruin (2017) tracked the machinations of then PM Tony Abbott and his chief of staff, Peta Credlin, while Plots and Prayers (2019) was the story of the coup against Malcolm Turnbull and the ascension of Scott Morrison.

Bulldozed continues into the rule of Morrison, how he trashed political conventions and failed to deal with climate change, economic pressures, China, the teal candidates and a resurgent Labor Party to become generally recognised as the worst Australian PM in 50 years. Whatever he did right regarding the pandemic, for example, is overshadowed by the wrong things he did, and the things he did wrong.

The new book wastes no time with scene-setting, perhaps assuming I will have read the first two books (I haven’t). I’m OK with that, since I’m pretty up to date with Australian politics.

It also quickly makes clear that Savva does not like or respect Morrison. It’s not long before she moves from others’ views – “They knew he was secretive and that he lied” – to her own – “He was petty and vindictive”, which is, at least, interesting for a former advisor to conservative politics and a Nine Fairfax columnist.

Since this is billed as the “inside story”, written by “Australia’s renowned political commentator, author, and columnist” (there’s only one?) with extensive contacts in the Coalition due to her background as a senior media adviser to former Liberal treasurer Peter Costello, I was hoping for some insights beyond the existing media coverage.

My hopes were not well-founded. Savva does do a terrific job of summarising what Morrison did, relaying what his colleagues and opponents thought of him, and occasionally theorising on the role of his faith or how he came to even be elected.

What I didn’t get, though, was any new information. I felt like I was mostly re-reading what I already knew from all kinds of media coverage over the last few years. What few revelations are in the book are not exactly world-changing. For example, Josh Frydenberg has been mostly quiet about Morrison’s political tactics, including making himself a party to the office of Treasurer without telling his closest colleague. However, Savva extracted from the former member for Kooyong that he thought Morrison’s actions were “a considerable over-reach.” Whoa! That’s giving him both barrels!

There really wasn’t anything in Bulldozed I didn’t already know, although every time I thought about quitting the book, the quality of the research and writing kept me hanging on – just. Savva is an engaging writer and maintains a newspaper column style in tone and phrasing, rather than going all book-ish and authorial. And she does get a few quotes from some interesting and interested observers.

On that basis, if you haven’t followed AusPol very closely and are wondering what exactly Morrison did that was so terrible, Bulldozed will fill in a lot of details for you, some of which will make you shudder at the sheer audacity, cruelty and mendacity of our former PM.

If, however, you’re hoping for some over-arching view of what Morrison’s reign means for the Coalition’s future prospects, conservative Australian politics in general and Australia’s standing on the world stage, you probably won’t get it from this book.

I would have liked some more big picture stuff from someone of Savva’s journalistic standing, or even the people she talked to, but that would seem to be a different book.