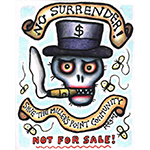 How better to start September than with a bit of community activism?

The current NSW Government, a Liberal Party administration that has seen no less than 10 members resign or stand aside following corruption inquiries this year, is in the process of selling off swathes of public housing – previously occupied by low income earners in protected housing arrangements – to the highest bidder.

Despite claims by the Government that the properties weren’t worth much anyway, in each case the auctions have realised record prices well above the reserve.

The promise is that the evicted residents will be provided with “more suitable” housing, in precincts well away from their community, and especially that harbour-hugging, historic and ripe-for-development area lusted after by the wealthy: around the foot of the southern end of the Bridge at Dawes Point, along Walsh Bay, up and over into The Rocks and that area tucked in behind the Barangaroo development, known as Millers Point.

A friend wondered if I could help the people of the community to build a website that would document and archive the residents’ way of life, the local history and the senselessness of ripping all that away for the sake of filling a Government’s coffers.

“We do this not to create an archive to substitute for the living community, but to reflect that community as vibrant and multilayered, where the residents should have the right to continue to live and extend the deep history of the place.”

I should point out that, while I’m certainly prone to getting involved with many a good cause just because it’s the right thing to do, I do have a personal interest in this issue. For one thing, I spent many hours trawling through The Rocks when I was devising my (never-produced) Sydney Literary Pub Crawl.

This was based on a Literary Pub Crawl I attended in Dublin, where a small group of actors would perform selections of work by famous Irish poets and playwrights, moving from pub to pub along the way. The connection between pubs and writers is strong in Dublin, but then so it is in Sydney, and it occurred to me two actors could do a similar show in The Rocks – where the number of pubs within walking distance of each other is probably greater than anywhere except maybe Balmain.

In this process, I also came across many local “secrets”, stories behind places that most people will never know. The Rocks, Millers Point, Walsh Bay and Dawes Point area is an amazingly rich and historic area, in many ways the cradle of Sydney history. Writers such as Ruth Park and Eleanor Dark knew this, and their fictional accounts of the area are among our best. 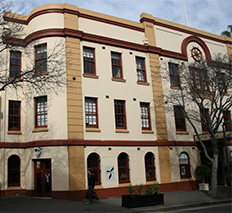 The area also includes a building that is special to me, called The Sailors Home.

This was established in 1865 as a place where crew members of the many ships that frequented Sydney Harbour could find temporary accommodation. Not surprisingly, it was a pretty rambunctious place – it’s understandable that the original name of Seamen’s Mission was changed. After 30 years, alternative premises to house itinerant sailors had been established and The Sailors Home went through a multitude of uses.

Among these, it became home to the Marionette Theatre of Australia in about 1983, just when I was with the company. MTA had been housed in a musty old building in Sussex Street, where master puppeteer Richard Bradshaw worked his magic. The new digs were (relatively) clean, light and had fantastic space for workshop and performance areas. I had a couple of terms with MTA (devising, rehearsing and performing TIE school shows that would tour throughout NSW and beyond).

I moved on to work with other companies, ending up in Newcastle following a stint with Freewheels Theatre. I taught at two local youth theatre companies there and, when I returned to Sydney in 1987 with my wife Hazel, I picked up some teaching work with Australian Theatre for Young People, who were by then based at The Sailors Home. MTA was still there, but floundering, while ATYP thrived. Some terrific kids passed through my non-verbal theatre classes (including Nicole Kidman) and we had a ball in the warren of warehouse rooms.

By 1988, MTA was being pushed out of The Sailors Home (and, in fact, with funding withdrawn, was being pushed out of the scene altogether) and I was making a start in information services as a way to supplement my income from theatre work. My good friend Adam Newcombe (one of the most under-rated puppeteers Australia has produced) was working with MTA and roped me into some work celebrating the Bicentennial (let’s just say it involved me marching down Macquarie St in nothing but a loincloth – yes, well may you recoil). As a reward, we got to see the rest of the celebrations from the roof of The Sailors Home, the perfect place to observe a truly amazing day on the Harbour.

OK, so that’s just one person’s connection with one building. But put together the “ancient” history of The Rocks, its time as Sydney’s working waterfront, its significance in the Green Ban battles of the 70s and the living history of the current residents of Millers Point, and it is just unconscionable to toss it all out for property developers.