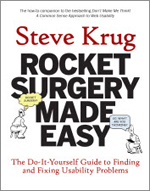 I wrote a review of Steve Krug’s book Rocket Surgery Made Easy in 2010, after I bought it online.

I stumbled across it again yesterday, when I logged in to Amazon to look at another book entirely (Make: JavaScript Robotics: Building NodeBots with Johnny-Five, Raspberry Pi, Arduino, and BeagleBone, if you must know).

Just this week, I’ve been thinking about UX topics (well, because registrations for UX Australia opened and the speaker list looks amazing, OK?), I used several resources listed on the treasure trove that is the UX Mastery Usability Test page (because I don’t have the resources to undertake full scale usability testing), and I also had cause to hassle Steve directly (because I have hopes of enticing him from the US to Australia to speak and/or run workshops for Web Directions – gosh you’re nosy).

And then the day before yesterday I was getting another book from my library (oh, for heaven’s sake – Andy Clarke’s Hardboiled Web Design, alright? – stop distracting me) when Steve’s first book Don’t Make Me Think! fell out (no, not the revised edition and no, no-one was hurt, sigh).

Anyway, so I re-read my Rocket Surgery review on Amazon and realised I still agree with everything I said five years ago.

Usability testing is more important than ever, I’m still unlikely to get it done as formally as I should and this book is still a goldmine of techniques that make me consider how usable the sites I build really are.

So, even though I also published it on this site back then, I’m going to re-publish it now (because I can, so there).

Steve Krug is the author of the bestselling book Don’t Make Me Think!, which has racked up worldwide sales of 250,000 since its publication in 2000.

That book based its approach to assessing and improving the usability of websites on the injunction in the title. If visitors to websites have to figure out what to do on a website, then the website is operating at a disadvantage.

Krug offered some very pertinent, uncomplicated advice on web usability, how to judge it and how to implement solutions to problems that are identified.

When updating that first book in 2005, Krug decided that Rocket Surgery Made Easy had become necessary: a handbook for putting usability principles into practice, focusing in particular on user testing.

The title refers to the phrase Krug coined (and trademarked) to summarise his view that all of this is just common sense: it’s not rocket science and it’s not brain surgery.

It also gives a clue that Krug, while determinedly practical and grounded in the day-to-day business of designing and building websites for paying clients, approaches the subject with considerable humour and playfulness. It’s apparent that this is partly out of a concern that usability might be a dry subject for some, but also because Krug is a very funny guy. I think we’d enjoy his workshops, if he ever brings them to Australia.

Rocket Surgery Made Easy is itself easy reading. Less than 160 pages, it is well laid out, charmingly illustrated by Mark Matcho and very, very well edited – big hat-tip to the people at New Riders.

The basis of the book is that it offers how-to advice on actually running user testing sessions. Krug is well aware that many designers and developers cannot afford the expansive, expensive and time-consuming approach to user testing that requires hiring rooms with two way mirrors and video equipment to observe and record user actions as they test a website under controlled conditions, so he has devised a budget approach based around the catchphrase of “A morning a month, that’s all we ask“. Catchy phrases are an identifiable part of the Krug approach.

Because it’s well-written, because Krug is witty, and because the subject material is based so much on common sense, it’s easy to whizz through the book. But how much will it change the way a web designer or developer works?

Frankly, while I agree with the need for it, and understand the benefits to be gained, user testing is unlikely to form a significant part of my day-to-day work scenario, at least while I remain a one man design band juggling a roster of new websites and long term clients. The logistical practicalities of even “a morning a month“, using three testers without a lot of complicated equipment, are prohibitive. I accept that this may give me and my clients headaches into the future.

However, Krug’s books – the first explaining why usability matters, the second explaining how to do it – do give me a platform for addressing usability issues. The way Krug explains stuff allows and encourages me to engage with usability issues. Walking through his approach to user testing tells me a great deal about how I think about usability and how I can improve it. This alone gives me a competitive edge over designers who don’t “get” usability

Perhaps both these books should be bundled under the collective title Make Web Designers Think! It’s what Krug does extremely well. He raises simple but devastatingly critical usability issues, explores his own way of thinking about them and then offers ways to deal with them.

Krug points out – and emphasises – that anyone can do this. But the fact is that many web designers do not give themselves over to critical thinking, and even when encouraged to do so, may not be sure how to analyse, document and translate their thoughts into design changes.

It is these people that will likely get the most out of Rocket Surgery Made Easy, but they may also be the last designers to actually buy it.

Still if it does anything to get even highly experienced web designers thinking about what they are doing in a critical, insightful and constructive way, it will help to shape a better web.