On Thursday 7 May, I was contacted on Facebook by someone claiming to be Sheridan Maura who advised me I had won $950,000 in a Facẹbook Lottery).

If you look carefully, you can see the “e” in Facẹbook has a cedilla – there’s a hint right away that this might not be totally legit.

A quick Google turned up quite a few explanations of this hoax – because, of course, that’s exactly what it is. I found the Hoaxslayer page on Advance Fee Lottery Scams to be particularly useful, noting that it is not limited to Facebook and “is just a reworking of the classic “Nigerian” advance fee scam” (I still have an actual pre-Internet Nigerian scam letter). The basis of this scam is that the target has won some massive prize but must meet the costs of having the prize delivered to them.

Comments on the “Lottery” Facebook page show that this version asks victims to pay $500 to cover Fedex costs of delivering their “winning certificate”. 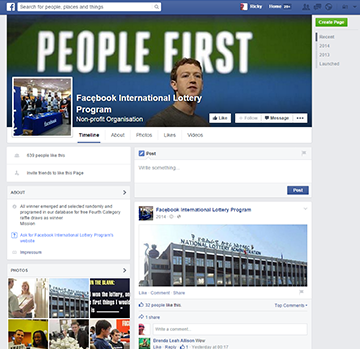 Now that we have the web, the opportunity exists to create a web page of some sort to “prove” the authenticity of the program. Even then, it has to be something credible. In this case, hooking it on Facebook meant it was trading on both the authority of the social media giant and that Facebook would be in a position to make such a prize available. You can see for yourself that the Facebook page for the “Lottery” has plenty of posts with photos of supposed winners, positive comments and Likes. If you see any negative comments they will have been posted today and will be removed by tomorrow.

Knowing now what I was dealing with, I decided to have a chat with “Sheridan” and see where it would take me.

My name is Sheridan Maura, I am a Facebook Online Coordinator i live in Texas

Have you heard of the ongoing international lottery promo going on yet?

Has any of our Facebook staff informed of your winnings prize

Me: Hi Sheridan, no I’ve never heard of the international lottery promo. What is it?

Sheridan: I am pleased to inform you of the result of the just concluded annual final draws by Facebook group in cash new year promotion to encourage the usage of Facebook worldwide. Your name was among the 12 lucky winners that won the sum of $950,000.00USD (Nine Hundred and Fifty Thousand United States Dollars) each on the Facebook group promotion

The online draws was conducted by a random selection of emails you were picked by an advanced automated random computer search from Facebook in other to claim your ($950,000.00USD) the lottery program which is a new innovation by Facebook, is aimed at saying a big thank you to all our users for making Facebook their number one means to connect, communicate, relate and hook up with their families and friends over the years.

Me: Really? That sounds amazing. And, if you don’t mind my saying, a little hard to believe. What’s required of me, Sheridan, what’s involved in claiming my prize?

Sheridan: This is part of our security protocol to avoid double claiming and unwarranted abuse of this program by some participants and scam artists. All participants were selected through a computer ballot system drawn from over 20,000 companies and 30,000,000 individuals email addresses from all over the world. This promotional program takes place every three years. You may be rest assured that this is real and legal. There are some scam artists around but thanks to the FBI, 86 of them have been arrested.

Me: So what’s involved?

Sheridan: Do you have any government approved ID Mr Ricky

Me: Sure. I hold a current Australian passport.

How old are you Mr Ricky

Hold on a sec please

Note them down now on a safe place and keep its very important. Let me know when done putting it down.

Me: Can I ask you, Sheridan, does claiming a prize involve my forwarding you any money?

Sheridan: Not at all Mr Ricky

Me: You’ll forgive me for being a bit cautious about this, but how do I know this is legitimate?

Sheridan: You can see photo of our lucky winners on our Facebook page.

Sheridan: She has receiving her prize.

Me: Why is she having money delivered to her in a box?

Sheridan: That is part of our securitys protocol.

Sheridan: I will guide you through the successful delivery of your winning prize

Your winning certificate will be sent to you

Sheridan: And you can call our head office at anytime if you would be needing further assistance

Now you will be required to contact Mr.Mark Zuckerberg via email head for the disbursement department for the claims of your winnings.

Send an email from your personal email account to Mr.Mark through this email address now facebookhqdesk@gmail.com with the information about you below and also attache a copy of your government approved ID

Once he gets the email with the information from you he will let you know how your winnings will be disbursed to you as soon as possible.

Me: Sheridan, are you telling me that Mark Zuckerberg – co-founder, chairman and CEO of Facebook – is also the disbursement officer for this promotion? And that he uses a Gmail address?

We are working in collaboration with Google

Me: Well that would be about the first time that Facebook collaborated with Google on anything. Are you sure you want to continue this conversation, Sheridan?

That’s why I was appointed anyways

This program is done once in every three years

We collaborated with Google for security reasons

Me: So you’re based in Texas? Are you an American citizen, Sheridan? Grew up in the US? 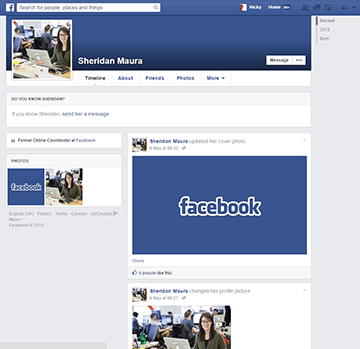 Sheridan: I am an American citizen I grew up here

Me: Why is your grammar so poor? I would expect someone who works in such a position for Facebook to have exemplary grammar.

Sheridan: Why did you say so

Anyways just give me some time

I’ll be right back

I want to quickly attend to a complaint

Me: Sure, I have a couple of things I’d like to check, too.

Sheridan: Meanwhile forward your details now to the email address sent to you earlier so we can Commerce the safe delivery of your winnings

Me: “… so we can Commerce the safe delivery …”? It does not appear that English is even your first language, Sheridan.

Me: You are coming back, aren’t you, Sheridan?

Me: Sheridan? Are you there?

Me: Is this goodbye, Sheridan?

The scammer has decided I’m unlikely to participate and ends the conversation. 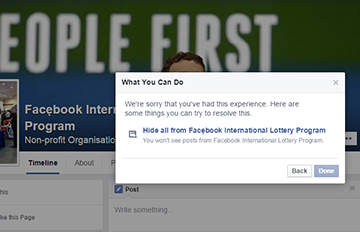 Each Facebook page has the option to Report it, which I did, selecting the “This is spam or a scam” option. That results in a “We’re sorry that you’ve had this experience. Here are some things you can try to resolve this” message, with the only option being to hide the page. I assume a report is made to Facebook but, judging by the comments on Facebook’s help forum – and the fact that this “Lottery” page is still there after four or five days, that doesn’t actually do much.

I also sent an email to phish@fb.com, as this is a form of phishing. I received no response.

I posted an account of my conversation on my Facebook timeline, mainly for laughs, which it duly received. But a couple of comments also made me think a little more deeply about it.

The fact is people can and do take these scams seriously, and lose money to them. The scam’s fraudulent nature might seem obvious to those of us who are willing and able to do a little checking and are skeptical about anything that claims to make us overnight millionaires, but there are two strong drivers that can motivate some people to put aside their doubts and choose to believe the scammers: greed and desperation.

Frankly, I’m not too concerned about people driven by the first motivation. $500 might seem like a small investment for a well-off Westerner who is prepared to gamble on receiving a much larger windfall. These people have given their cash and bank account details to scammers from time immemorial. The fact is, like spam, scams work. Typically, these victims will not come forward when they realise they’ve been conned. They hide their embarrassment and write off the loss as bad luck. Data shows there are plenty of them and, even though these scams have now had a great deal of publicity, they continue to throw their money away.

What’s of greater concern is people driven by the second motive, people whose financial situation is close to disastrous, and whose desperation blinds them to the danger signals. They are prepared to sacrifice their limited assets in the hope, the belief, the dream that they have been lucky, that they have drawn the fabled Golden Ticket that will solve their problems. It is to these people that Facebook owes a duty of care, carries a real responsibility to hunt out the scammers and prevent them from using the biggest social connector the world has ever seen to rob the innocent and guileless.

I don’t see Facebook doing that. And that’s appalling. Ultimately, it’s not a joke and Facebook needs to take it seriously.

But I doubt it.