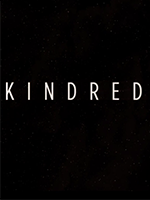 Kindred is a fascinating little movie, and definitely worth catching if you can (the festival circuit is probably your best bet).

It was born out of a recognition that there has not so far been a great deal of science fiction cinema featuring indigenous Australians, even though there is rich ground to be mined around the idea of what it means to be alien.

Crowdfunding raised the necessaries (disclaimer: I donated) to turn a glimmer of an idea into some serious screen time.

The guts of the story is that a modern day young indigenous man feels out of step with his community and their beliefs, declaring to his sister a greater affinity with whatever might be out there in space. Just as their night-time argument draws the attention of a community uncle, the trio is visited and abducted by a UFO.

The rest of the story is told in flashback as the young man is about to be returned to his community. He remembers a series of scenes that take place in the brightly lit, sterile environment of the alien spaceship. How the trio deals with the aliens – and are dealt with – is the core of the movie.

In this context, any film-maker will try to avoid cliché and aim for a fresh take, and this mob draws on the main characters’ indigeneity to inform the decisions they make and actions they take. There is a feel to their words and actions that is rather different to that of the average WASP space hero.

Some seriously good visual effects enhance expectations and raise the creative bar. Most sci fi films live and die by their FX – this one lives. Most films of any genre also live and die by their story – this one more than lives: it lives, it writhes and it grabs the audience. A point worth mentioning is that the sound is excellent and does much to set and sustain the mood of the piece. If there is a weak point, it is that the relaxed, confident delivery of the seasoned performer David Page as the elder draws attention to the less developed performance skills of the two younger (human) performers.

Nevertheless, there is a ton of room for this to evolve into a full length feature, and I hope the makers get the chance to explore more deeply the ideas thrown up by this excellent short.