My son Cormac has been talking about picking up the guitar again. Being 12 now and all grown up, the 3/4 size Valencia nylon string classical he used in early music classes is not going to cut it.

He’s been displaying more interest in making music lately, and I was pretty impressed when he worked out how to play Axel F on piano (to me, it’s Beverly Hills Cop; to him, it’s probably Crazy Frog), so I want to encourage him.

The music corner has a few good options, but he’s not getting at the Maton and the pickups on the Ibanez semi-acoustic are shot. But wait. Isn’t there another guitar tucked away downstairs? Ah yes, the Ashton D29CEQTSB.

Ashton is an Australian manufacturer, started in 1997 and now selling guitars and related equipment all over the world. I picked up this guitar at an inner west school fete about 2004. Cormac was big enough then to be in a stroller, but it was a couple of years before we moved to Corrimal.

Now, I’m not one of those who buy up lots of cheap guitars at fetes and markets – although that’s a great way to rescue some treasures that would otherwise end up at the tip – but this stood out as a bargain. A fairly new cutaway dreadnought acoustic, in good nick, with a built-in pickup and equaliser, complete with a soft case that meant I could carry it home easily.

Price: $25. Well, that’s just irresistible. At that price, it doesn’t matter if it sits unattended for a few years. Which is what it did, for a decade.

Like most guitars, the model number tells you something about the guitar, sight unseen. “D” means it’s a dreadnought, that classic acoustic guitar shape with the fatter bottom half. The numbers are the manufacturer’s model ID.

“C” means it’s a cutaway, where a section of the body where it joins the neck is cut away to let the player’s fingers get at the highest notes on the fretboard.

“EQ” tells you that it has an equaliser built-in, in this case a four band B-Band Preamp EQ 7545R Equalizer attached to single transducer in the form of a piezo pickup tucked inside the body.

Lastly, “TSB” stands for Tobacco Sunburst – a paint job I always associate with Buddy Holly’s Fender Strat, but feel free to substitute your own guitar icon.

The Ashton has a mahogany neck but uses the mahogany stand-in sapele for the back and sides, and features a rosewood fingerboard and bridge. It has a maple top with the aforementioned TSB finish giving it quite a dramatic look. 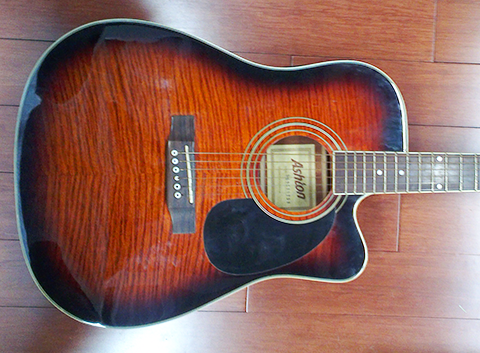 With luck, the dovetail neck joint and chrome die cast machine heads have survived all those years of inattention.

Bear in mind, I’ve been playing the Maton and have become used to its honeyed, mellow sound. The first thing that strikes me about the Ashton is how loud it is. It’s brassy in tone, which probably has something to do with the brass-wound strings I put on it when I first bought it. That extra bit of zinc does seem to give the sound more attack than bronze strings.

It tunes easily and seems to stay in tune for longer than I’d expected. In fact, it’s a very solid sound even after an hour of strumming, picking, stretching and bending. I tune it to an E chord and try a bit of slide, then fix a capo at various tunings. The Ashton responds beautifully, keeping a nice even tone and requiring very little tuning adjustment.

It has a lower action than the Maton, which makes playing barre chords way up the fretboard relatively easy. After sustained playing, I’d say there is a little less depth of tone than the Maton. It still sounds louder – would probably drown out the Maton if they were played side by side – but is quite toppy in sound and maybe a bit thin.

Time to plug it in. The EQ takes a 9 volt battery, and the battery check light comes on. The lead connection is at the bottom of the guitar, inside the button to hold a strap, and I plug it into my ancient Landis 5, which crackles agreeably as it’s fired up. 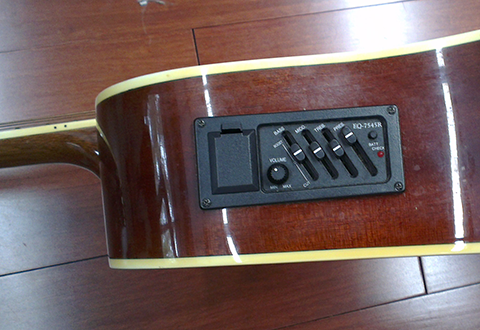 After a bit of manipulation, the combination of the amp with its single treble and bass knobs and the equaliser with its treble, middle and bass sliders settles on a sound that has smoothed off a lot of the brassiness. I find two settings that suit playing chords and lead respectively and have a bit of fun switching between the two as I play along with Eric Clapton on Lay Down Sally.

I find EC to be a very accommodating host musician, leaving plenty of spaces for me to fill in. Thanks, Eric.

I can’t find this model on the Ashton website, so I presume it’s out of production. There is a more recent Ashton D59SCEQ with a cedar top that’s obviously quite similar and that retails for $400-$500 but it looks like you could pick up a second hand D29 for less than $200, if you can find one. Of course, if you stumble across one for $25, snap it up.

I think it will suit Cormac very well. It’s a comfortable guitar to hold but big enough to feel proper grown up, and it produces a very agreeable sound. I don’t think the loudness will worry him and, put through the amp, the Ashton D29CEQTSB might just inspire the lad to experiment a bit.