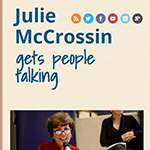 Back in August, I completed my second major redesign of a website for Julie McCrossin.

Not only is Julie a client who has been with me for nearly a decade, and someone with a high public profile, she is a wonderful person for whom I want to do the best work possible.

Maybe that’s not a clinical, professional attitude but it’s a central part of my approach to web design and development.

Put simply, I think I produce my best work for people I really care about, and I care a great deal about Julie.

We share certain traits in our personal and work history, including a commitment to social equity, egalitarianism and standing up for the exploited, the maligned and the downtrodden. Her work with people with disabilities particularly resonates with me as a supreme example of how to address and draw attention to systemic inequity at the same time as demonstrating the normalcy of the people affected and the abnormality of the way they are treated.

Significantly, we have each found ways to make a living that make those attitudes not just part-time, after-hours topics of conversation but a central plank of why people pay us to do what we do, even though the media we work in are quite different, and we’ve each had a range of jobs, if not careers.

Interestingly (well, to me, anyway) we share a background in community theatre, the theatre of social activism. I even performed in a 1981 Tasmanian production of a play (The Silicon Chip Slippery Dip Show) that was devised by Julie and her cohorts in Pipi Storm, a theatre troupe of the 1970s and ’80s that will always be regarded as one of the paragons of putting social activism on the stage – especially when the stage is a street, a school or a community hall. Funnily enough, one of her Pipi Storm colleagues, Brian Joyce, later became a director I worked with at Freewheels in Newcastle.

More recently, Julie developed her high public profile through her work in radio broadcasting, television and print journalism. Most people probably know her through her work on Good News Week and Radio National.

Even more recently, Julie has become one of Australia’s most sought after event hosts, an MC who can engage any audience and make any type of public event a raging success, from conferences to panel discussions to corporate workshops. From the outside, this might seem like a knack, a lucky trick of fate that lets her keep audiences and participants both amused and “on track”.

In reality, I and people who know Julie well are aware that this is the result of an almost fetishistic attention to detail. Her research skills are unparallelled, and the amount of time she puts into understanding the context of the events she hosts would daunt the faint of heart.

She has also undergone some traumatic circumstances in both her professional and personal life, tests of character that would have defeated many people.

So, given my respect for her work, my admiration for her attitude to life and my awareness that her web presence may well affect her immediate and long term success and well-being, I put myself under a certain amount of pressure to deliver.

I hope I’ve done that.

The Canvas theme was well up to the task, although I hacked it customised it rather more than for any other site so far.

Possibly the most interesting plugin I employed was the very nifty Scroll Back to Top function developed by Joe Sexton. It really is clever, cute and very effective and will no doubt become a part of my regular arsenal. 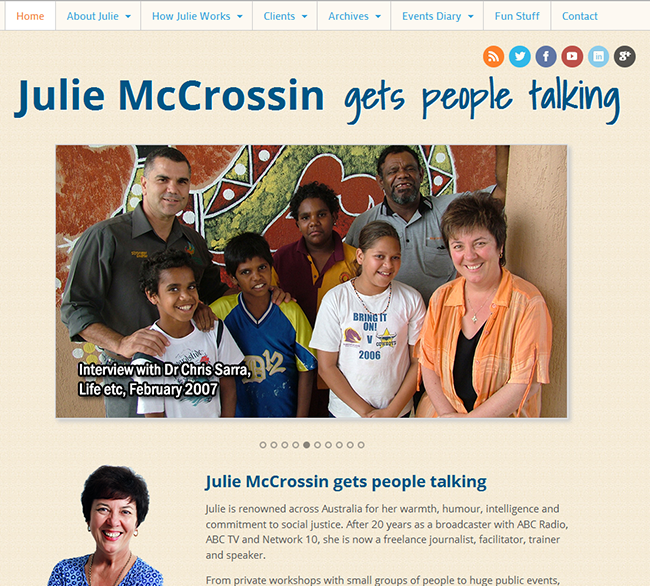