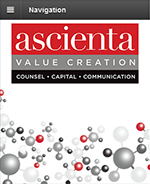 July saw me work on a project in collaboration with Hazel, something we don’t do all that often but which has led to some great results.

In this case, the job was to design, construct and populate with content a small site for a trio of dauntingly high powered business investors who work under the name Ascienta.

Their particular specialty is spotting progenitors of disruptive technology and giving them support in the form of investment funding, business expertise and impeccable connections.

They search out creators of the technology that will dominate our futures, but which are unlikely to get anywhere without the kind of support Ascienta can give.

This site would provide an explanation of their approach and background information on the three principals, for which Hazel would create the text content.

The web design brief sought a non-corporate look, something that would reflect Ascienta’s distinctive difference from a run of the mill investment back, and would draw on the tones of red, black and grey used in their company logo.

To illustrate possible visual approach, we worked up a series of mockups of web pages displayed as they would be seen on a phone, tablet, laptop and desktop. We did this for nine distinct background motifs, ranging from a night-time cityscape through networks of molecules to a car driving up an ocean road, all intended to create a full screen web vista.

I haven’t taken this kind of approach before, not least because producing 36 web page mockups from scratch, even with all the advantages Photoshop provides, takes an awfully long time.

Canvas made it easy to switch background images in a flash, load the site on localhost, resize the browser as needed and take screenshots I could polish in Photoshop. This method has the distinct benefit of accurately capturing and illustrating the different responsive effects according to screen size.

In the end, they opted for a version of a molecular diagram. The image I had used was of two dimensional, interconnected circles, which I had coloured strategically in the logo shades. The one amendment sought was that this should be a more three dimensional.

Back to Photoshop we go. I experimented with a few different approaches until I stumbled on using a white brush with hardness set to 0% and the size about two thirds of the target molecule circle. Placed a little off centre (and consistently in the same place on each circle), this creates the impression of a light source shining on a round object, a three dimensional effect.

It’s not photo perfect, but it doesn’t need to be as it’s an illustration and not trying to be photo realist. 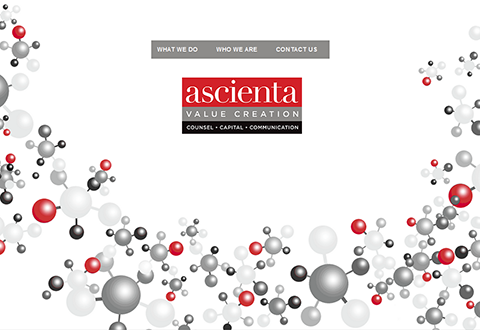