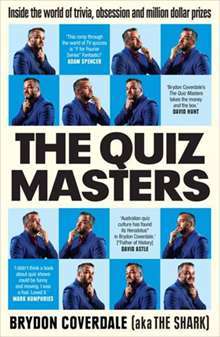 I don’t know about you but I grew up with quiz shows.

I came to them after the heyday of radio but I’m old enough to have followed the first Australian TV shows.

I can remember seeing Barry Jones make Bob Dyer roll his eyes on BP Pick A Box as he questioned yet another question, let alone the answers.

Quizzes, puzzles, board games, crosswords, IQ tests are all easy and useful ways for non-English speaking migrant kids to learn the local lingo. It was my Dad who got me into crosswords, starting with the Dutch language puzzles in the Dutch Australian Weekly. When I segued into English language crosswords, he could no longer give me his strategic advice, so I started reading dictionaries and encyclopedias. My brother Harry taught me to master the fiendishly difficult cryptic in The Weekend Australian, republished from London’s Sunday Times.

Growing up, I soaked up all the TV quiz shows we could get on the one commercial network available in Hobert: Temptation, The Great Temptation, Sale of the Century. I’m still a quiz and trivia buff (10 out of 10 for yesterday’s Saturday Paper quiz, thank you very much).

This is the world of The Quiz Masters. Author Brydon Coverdale does a brilliant job evoking those memories for me, with the bonus of explaining how those shows came to be, as well as all the other quiz and game shows I didn’t get to see in my youth. I had no idea there was an Australian version of Jeopardy, hosted by the ubiquitous Tony Barber (he also hosted the three other shows I’ve named). It wasn’t a success, and Coverdale has an intriguing theory to explain it. Fascinating stuff.

On a side note, my partner Hazel was deeply involved in book publishing for a number of years and she commissioned and edited Tony Barber’s 2001 autobiography Who Am I?, which is referred to in The Quiz Masters several times for its backstage details. Hazel was also a successful contestant on Sale, opting to leave with one of the major prizes.

The thing that makes The Quiz Masters such an excellent book is that the author isn’t just looking at the history of TV quiz shows in Australia in an academic way, he’s describing his own life in them, from an early attempt as a teenager on Sale of the Century through his more successful and lucrative efforts on other shows, all the way to his current role as The Shark, an expert Chaser on The Chase Australia. He has been on, and competed successfully in, most of the shows he’s talking about. This lends the book an authenticity and personal immediacy that would be hard for anyone else to match.

The Quiz Masters also makes excellent use of the electronic book format. Whenever a quiz question comes up – which is on most pages – it comes with superscript link. Activate the link for a popup with the answer to the question. Brilliant! Readers of the paper version presumably have to go to the end of each chapter, a much less satisfactory experience, I would think.

On top of that, Coverdale’s experience as a journalist is very evident. He knows how to tell a story, and he really can write. He seeks out and interviews the hosts and the contestants, relating to them and getting them to open up about their experiences in often exquisite detail. He’s structured the book so that he conveys a detailed history of the genre, and every chapter is a delight. You might expect that from a king of trivia but on top of that, he describes his own strategies, methods, successes and failures in a lifetime of public quizzing.

As it happens, the first interview in the book is with Cary Young, arguably Australia’s greatest quiz champion and a genuine world beater. I loved the contests he had with David Bock, Fran Powell and a handful of others who rose to the top as Sale of the Century champions, local and international. That Young died the day after I read that chapter lent a certain poignancy to the rest of my reading.

If you even vaguely know the shows (Wheel of Fortune, Family Feud, The Biggest Loser, The Einstein Factor, Burgo’s Catch Phrase, Hard Quiz, Who Wants to be a Millionaire – they’re all there), the hosts (Larry Emdur had me laughing out loud), the question writers (David Poltorak, Bruce Elder, David Astle, et al) and, of course, the contestants (I did not know of William Laing – what a story!), you will absolutely lap up The Quiz Masters.

If that’s all unfamiliar territory to you, get ready to be totally sucked in to the world of Australian quizzing – past, present and future.