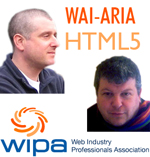 I should explain some of the references in that last post.

More information will be made available shortly (ie as soon as I write the next newsletter) about WIPA’s upcoming national workshop tour, but I can tell you now that we have secured the services of Bruce Lawson and Steve Faulkner to hold masterclasses in HTML5 and WAI-ARIA with Australian developers and designers according to the following schedule:

Venues and ticket prices are yet to be finalised. Each workshop will take about three and half hours long, divided into digestible sessions.

Bruce and Steve have also asked for opportunities to chat with the locals in less formal settings, perhaps not totally dissimilar to say, a pub. This will be a unique chance to chew the web fat with two global champions of standards, inclusion and the open web.

WIPA is currently working out how to merge with the Australian Web Industry Association (AWIA) to create a single industry body. I’ve been a Vice President of WIPA for the past year, and was recently elected President.

Steven Bradbury is an Australian ice skater who won an Olympic speed skating gold medal by being the only one in the race not to fall over. My ascension to the WIPA Presidency could also be seen as a case of “last man standing”.