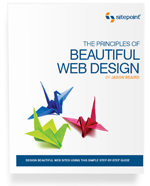 It shouldn’t surprise that a book about beautiful design is beautifully designed.

Still, Jason Beaird and the Sitepoint editors do such a great job of applying The Principles of Beautiful Web Design to the book itself, it’s worth remarking on.

Like the best web sites it describes, this book has rich content, is well-structured and is a pleasure to look at.

He’s not afraid to be very specific about his coding or Photoshop techniques – something that many authors might shy away from on the grounds that a) you don’t want to give away trade secrets and b) you leave yourself open to others critiquing your techniques in less than positive ways.

Photo illustrations and diagrams are used judiciously and to excellent effect. The publishers have clearly gone to considerable effort to ensure that the illustrations actually illustrate something and the medium of paper is used to its best effect in describing the web.

Jason advises that “the content is directed toward programmers and developers” and his language and tone is appropriate to this audience. He assumes the reader can code, but may seek greater control over the graphic elements in web design.

I suppose that audience includes people like myself who have been designing and coding sites solo for over a decade, and are on the one hand trying to keep up with more recent technological web developments while on the other lack even a language to discuss graphic art and typography as they apply to the web.

The book’s 163 pages are divided into five chapters: Layout and Composition, Color, Texture, Typography and Imagery, which pretty much covers the areas of expertise with which any web designer must wrestle, assuming they can code.

There is a satisfying emphasis in each case on understanding the context (technological and historical) and the tools while leaving plenty of room for applying subjective judgement and choice. Jason addresses each broad chapter topic through the satisfying device of an account of his design of a web site for a specific client, which lends an immediacy and practicality to his words.

Discussion of the issues raised is quite brief but at the same time somehow manages to inspire as well as explain. Personally, I found his chapter on colour a revelation – I now have a way of doing what I have been doing intuitively in a more organised and no less artistic way.

Which leads me to what I think impressed me the most about this book. The clue is in the use of the word Beautiful in the title – not Clever, not Spectacular or Effective or Valid, although they all may be equally appropriate.

The Principles of Beautiful Web Design is very much about making standards-compliant, semantic websites using CSS and it is certainly about meeting client needs but it is equally – maybe even predominantly – about applying artistic techniques to enhance the user experience.

As I read this book, I found that I enjoyed the same sort of frisson I felt watching people like Dave Shea and Eric Meyer coding onstage at the Web Essentials conferences (now Web Directions). It’s all publicly available information but it feels like I’m getting insider secrets, and a real insight into how designers work.

I also felt the same urge to put the book down and go over to the keyboard as I did when I read Jeffrey Veen’s The Art & Science of Web Design and Andy Clarke’s Transcending CSS.

And because Jason has focused on principles and their application, it is likely that I will be referring to The Principles of Web Design as repeatedly as those two.

A very welcome addition to my bookshelf.