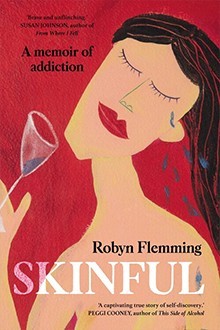 One of the tricky things about real life tales of deep personal change is that they tend to be written after change has been achieved, and that can’t help but inform the story of the author’s life that led to the change.

Robyn Flemming handles this better than just about anyone I can recall in “Skinful”, billed as “a memoir of addiction”. For those not aware, “skinful” is an Australian expression applied to someone who has had a great deal to drink, as in “Whoa, she’s really had a skinful!”. Interestingly, it actually comes up just once in the book.

Flemming recounts her journey into and out of alcohol addiction in a straightforward first person chronological narrative, taking the reader along as she drinks more, and more often, even as her professional career flourishes and she becomes a superfit marathon runner. White wine is her tipple, and a lot of it. There are incidents that trigger growing self awareness of the problem, but she seems initially oblivious to other flags in her life that make the reader scream, “OMG you are just as addicted to that awful (albeit sexy) man!”

This is cleverly done, because the book becomes about waiting for the author / protagonist to catch up and figure out what the reader can see happening – and what she’s going to do about it. In her afterword, Flemming does say the book took six years to write and she only came to full realisation towards the end. It makes for a very engaging tale.

Flemming’s lifestyle is unusual, to say the least. I lost track of the cities around the world in which she lives and works (it’s not that she has no home, it’s that everywhere is home) and I’m a little puzzled how she affords that from her work as a freelance editor but I guess living out of a backpack is cheaper than paying off a mortgage. Her talent and capacity for long distance running is also not something you come across in the average alcoholic, but it does make sense.

It was a relief to this reader when Flemming finally realises that pretty much ALL of her behaviour is the manifestation of one addiction or another, and her struggle to control and eventually abandon her drinking is a key to self understanding that will help her manage other aspects of her life.

I was bemused, though, that such an artful writer and apparently successful editor would claim to to be exercising to Donna Summer singing I Will Survive. Surely, she means Gloria Gaynor or, at a pinch, the 1996 version by Diana Ross. It’s an odd oversight that a fact checker would easily pick up, let alone a high level editor. Having said that, that is the ONLY factual nit I could pick.