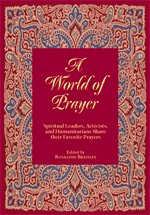 Back in March 2008, I designed a site for a Sydney author to promote her book, Mosaic, a “collection of favourite prayers and reflections chosen by a broad range of Australians from different backgrounds and faiths“, which Ros Bradley was inspired to compile in the wake of the 2005 London bombings.

It was a lovely idea, beautifully executed, that included some fascinating and unexpected choices from people not necessarily usually associated with faith and reflection.

It’s four years later, and Ros is about to launch the sequel. A World of Prayer has applied the same principle as Mosaic, only on a global scale.

It’s another lovely piece of work, sure to find an appreciative audience. The overwhelming impression is of how much the proponents and followers of various faiths and philosophies have in common with each other. Our shared humanity shines through, even as we wonder how such like-minded people can differ so widely – and often so violently – in the way their beliefs are applied.

I’m not a person with a lot of faith in organised religion, nor do I have an unshakeable belief in any one particular deity. If any label can be applied to me, it is probably fair to call me a humanist. Although I do have a sneaking hippy/boomer empathy with pantheism.

Designing the new site did throw up a couple of interesting issues. The site for the first book was based at a domain of that name, ie mosaicbook.com.au. The obvious strategy was to get a new domain for the author (rosbradley.com) and build a new site that incorporated the old one and offered room to cover the new book and anything else that might eventuate.

The shift from a .com.au to a .com domain is largely symbolic, but does give a sense of moving from a local to a global scale.

I was also asked to keep the site very low key. I interpreted this as an invitation and licence to embrace minimalism. Fortunately, I like white.

It then made sense to set up the pages for A World of Prayer in the same way, using the same styles and structure used for Mosaic adapted to the new book’s colour scheme and the available content (eg no reviews, as yet).

Using this method, the whole thing took very little time. Each book sub-site has its own stylesheet, as does the main site.

I’m sure there are better ways to do this, but it was quick and the result is reasonably elegant.