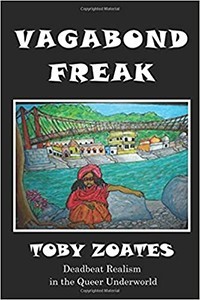 Vagabond Freak is a fascinating piece of work. A broad description could be “A young homosexual man’s travels and travails from his 1950s childhood in conservative suburban Australia to life on the Hippie Trail in India in the early 1970s”.

And that would be true, but it would not at all convey the visceral nature of this book: some fairly graphic male (and hetero) sex, the resigned acceptance of brutality in an unhappy family, the palpable sense of irresistible change – in both the times and the protagonist.

I get the feeling the author Toby Zoates identifies strongly with much of what Arthur Farthing goes through: his writing style is characterised by very convincing detail, although he’s a good enough writer not to sensationalise or over-dramatise. The action is wild enough and the personae bizarre enough that a matter-of-fact style is perfectly suited. Zoates creates many memorable characters, but the focus is always on Artie and his endless struggle with how he feels about his sexuality, his moments of both piercing self-analysis and excruciating naivety, and his often incisive perceptions of life and people around him.

If there’s a quibble, it’s that the book needs a good edit: proofreading (too many typos), line editing (some parts do go on a bit and could be tightened) and some minor structural edits (background information or exposition is unnecessarily repeated on a few occasions).

Look, the main thing is, Vagabond Freak is a cracking good read. I started with the notion that I’d just read a few pages here and there as time allowed, but I soon found myself drawn in for an hour or more. It’s a very engaging and compelling story: by turns confronting, emotional, exasperating, scathing, fantastical, and bitterly realistic. Highly recommended.