Immediate next on my reading list is Up From Down Under, from 2013, by Jeff Apter – recommended to me by the author himself. Took me a while to track down a copy but a mint condition copy arrived this morning. Looking forward to it. 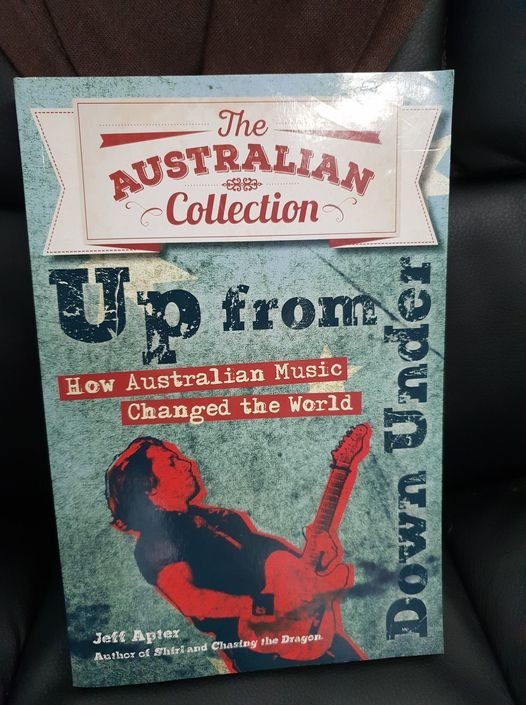 Appropriately enough, I finished this book, subtitled How Australian Music Changed the World, on Australia Day.

First, the focus of Up from Down Under is the success of Australian bands in the US and other overseas markets, specifically Peter Allen, Helen Reddy, Olivia Newton John, the Little River Band, the Bee Gees, Air Supply, Rick Springfield, Men at Work, INXS, Keith Urban and Gotye. What better day to read about an Aussie invasion?

Second, it’s just about perfect reading for a long weekend. Those 11 stories get told in 15 chapters over 250 pages, nicely set up for consuming just a chapter at a time, or cruising through the whole thing.

Before I started this, I assumed it would have a straightforward structure of one band or musician per chapter – but it’s much cleverer than that.

Each chapter does tend to give most of the attention to one or two performers, but that’s because over time the focus shifts as one or other act tries to crack the big time overseas. Apter cleverly puts the spotlight on each story, while retaining a fairly straight chronological order.

That also allows Apter to show how interwoven a lot of the stories are: some of the same people, venues, problems and achievements crop up again and again. And, of course, related stories come out – you can hardly discuss Rick Springield and LRB’s Beeb Birtles without explaining Zoot, can you?

As you’d hope, each story carries a lot of detail without becoming fetishistic about it, and there are some great snacks for trivia buffs.

The more recent stories are the briefest, but then those stories are still being wriiten, to some extent. Most attention is given to the breakthrough acts of the 70s and 80s – and that was a time when a range of Australians seemed to hit the top again and again. Apter digs into their motivations, their plans and the often unexpected ways their careers took off once they left Australian shores.

There are two other things I really liked about this book. Apter has drawn a really clear picture of who was doing what, when and where. For example, it’s very interesting to see which parts of the US respond to the Australian acts and where the Aussies choose to base themslves. It’s fascinating to see who was in LA, who went to New York, who ended up in Florida – and who they worked with.

Second, the characters of the performers really shine through. I’d say the average music fan will emerge from this book with a much clearer picture of who people like Helen Reddy, Peter Allen and Olivia Newton John really are or were. It’s unshamedly emotional at times, frustration and anger often shine through, and reaching the top often simply means starting the slide back down.

All of which makes for compelling reading. Highly recommended.