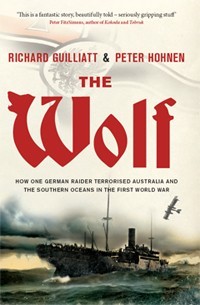 This site is to promote a new book by Richard Guilliatt and Peter Hohnen called The Wolf.

It’s an astonishing story, deserving of a wide audience.

The gist is that during World War I, Germany commissioned a freighter tricked up with some heavy duty firepower to undertake what was supposed to be a suicide mission to the Southern Pacific with a brief to cause as much destruction as possible.

The Wolf managed this so well that after 15 months, she had sunk over 30 ships and taken 350 men, women and children prisoners – without ever putting into port or breaking radio silence.

In fact, she managed to take the lot back to Germany.

That this is possible is astonishing enough. That hardly anyone knew about this expedition until Guilliattt and Hohner joined forces to research it and write it up is, well, even more astonishing.

Being a highly experienced, Walkley-winning journalist, Guilliatt puts the tale into a social context that draws it out of history and plonks it smack-bang in the middle of “people are interesting animals” territory.

Some of the photos are jaw-dropping, too. Ships being sunk, prisoners taking tea on deck, crew celebrating an equator-crossing, artillery in action and a rather creepy shot of a little girl prisoner holding hands with her captor crewman.

Our hope is that the website will help to bring the book to a wider audience than just the likely Father’s Day / military buff / history nut range. This is really a book about the psychology of people under incredible pressure, of how military and political considerations impact on individuals and of how the world itself was fundamentally changed by The Great War.

A pleasure to work on.

For those who are interested in such things, we used WordPress 2.8.1 as the content management system, adapting the simpleX 1.3.1 theme by Chandra Maharzan.

For particular functionality and layout, we installed the following plug-ins:

As a matter of course we also installed Akismet and WordPress Automatic Upgrade plug-ins and hard coded Google Analytics into the footer.