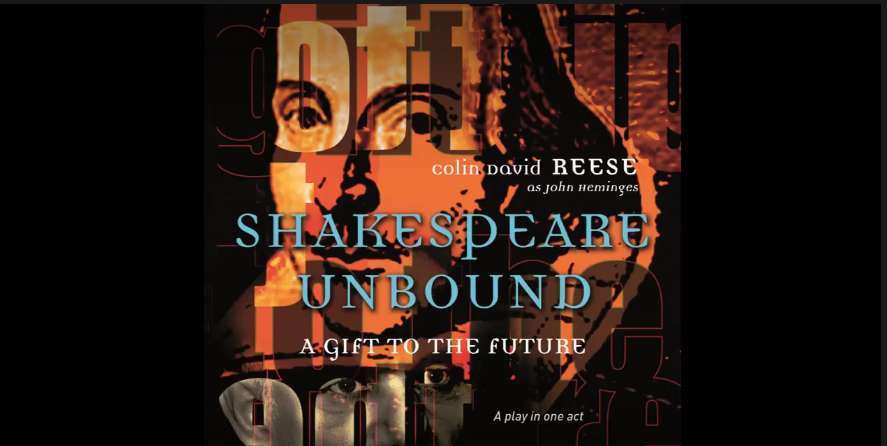 It’s one thing to have a clever idea, such as telling the story of William Shakespeare’s life and work through the eyes and voice of one of his fellow actors, a colleague who outlived the Bard and was among those responsible for ensuring that his plays survived in written form.

And it’s another thing to have the skill to write this idea into a one man performance piece that delves into the detail of Shakespeare’s life in such a way that it’s both true to his time and of interest to ours.

But it’s another thing completely to bring to such an exercise the performing skill that lets a single actor sustain an anecdotal narrative and also deliver excerpts from some of Shakespeare’s greatest speeches with a level of understanding and nuance that is beyond the reach of most actors.

Yet that is exactly what Colin David Reese has done in “Shakespeare Unbound”.

While Reese has performed this show live in many venues around the world, I saw it on video, a format that could potentially flatten idea, writing and performance but which he has cleverly used to bring the recollections of John Heminges directly into modern life.

In taking on the persona of Heminges (or Hemmings), the man who with Henry Condell was principally responsible for creating, seven years after the playwright’s death, the bound version of Shakespeare’s works we know as the First Folio – without which we would not have at least 18 of Shakespeare’s works – Reese unbinds what made Shakespeare tick, as much as that is at all possible.

With a single, bold conceit – that Heminges so desires to know whether “future ghosts” will appreciate what Shakespeare did that he “magically” manages to connect to and directly address a modern audience – Reese leads us into Shakespeare’s world: his family, his ambitions, his inspirations and techniques, the social and political world in which he lived and worked, and his unfathomable ability to understand and convey the extreme vagaries of the human condition in his extraordinary writing, both plays and poetry.

Heminges doesn’t pretend to understand how Shakespeare did what he did – although he gives us a few good ideas – but he recognizes the genius of it and he knows that Shakespeare’s work must be captured in print so it can be replayed on the stage by future actors.

Beyond the bare facts, this is all fiction. Reese takes what little we know of Heminges and his contemporaries – from poor William Knell to Tarleton, Kemp, Fletcher, Burbage – the evolution of the theatrical companies of the day, the Elizabethan and Jacobean court, the creation of the Globe, and Shakespeare’s personal life, to paint a vivid and compelling portrait of “Young Will”, referred to as such throughout.

It’s hard to think of anyone more qualified to undertake a project like “Shakespeare Unbound” than Colin David Reese. Born in 1950 and treading the boards by the age of 12 playing Shakespeare’s illegitimate son, he went on to share the stage with Sir John Gielgud, Paul Eddington and Alan Bennett when he was just 18. His acting career was not exclusively Shakespearean but by 1979, following a seven month run with Lauren Bacall in “Sweet Bird of Youth”, he was devoting himself to the Bard of Avon, decades of which has resulted in this project.

If I were to draw a parallel in performance style with anyone, it would be more with Sir Ralph Richardson than Gielgud, Olivier or the more modern players of the great tragic roles. This seems in keeping with the nature of Heminge’s own acting roles and his work as the administrator and manager of Shakespeare’s companies and, later, his archivist.

This in no way inhibits Reese’s interpretation and performance of cleverly selected monologues and speeches. While some are among the most famous of Shakespeare’s lines, they all serve to illustrate the development and focus of Shakespeare’s writing: the history of England’s rulers, the ability of men (and women) to dissemble and deceive, loyalty and family and grief, love and lust and obsession, the psychology of power, and – so tellingly – the nature and power of theatrical performance itself.

Heminges is freed to be the sharp observer, intimate friend and ultimately keeper of the Shakespearean flame, while Reese can display his very considerable stagecraft and virtuoso delivery of magnificent writing. Heminges is an ideal fictionalised narrator of life with Shakespeare, and Reese is a vivid and compelling interpreter of both Heminges and Shakespeare.

I concede that, apart from younger audiences wrestling with Shakespeare as the focus of study, I’m probably an ideal audience for this project, but I’m sure I’m not the only one and with an entry price of US$10, the video of “Shakespeare Unbound” is a dead set bargain.