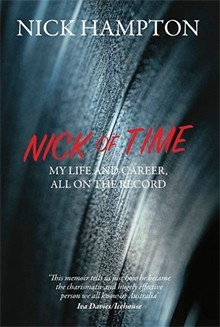 From the birthday haul: Nick of Time is a memoir by Nick Hampton about his time at recording houses EMI and CBS, in Australia and overseas.

I thought it might be a bit dry, but it really rocks along. Like Jeff Apter’s recent George Young bio Friday on My Mind and Stuart Coupe’s Paul Kelly it has a great deal to say about the Australian music industry from the 60s to now. Money man Hampton has some great insights and – unlike lot of other bios – he’s quite prepared to name names along the way: who had a tantrum, who made a dud business choice.

It does have some of the usual bio limitations, skipping from finding an ideal home for his wife and three kids to suddenly setting up house with his new partner. I suppose that’s understandable.

It’s quite different in tone to books by or about the performers, though. For one thing, a lot of deals seem to depend on how well wives get on in St Ives and Chatswood. But the recording industry machinations are fascinating – especially putting Australia in context with the UK, US and Europe. Of course there’s a lot of appearances by well known acts and some surprising character assessments.

All in all, a rollicking good read.