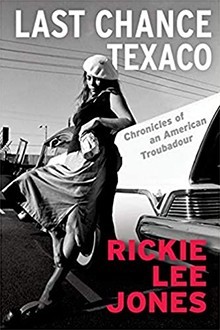 It’s as idiosyncratic, off-centre, expressive and polished as her best musical work. It swings wildly in style from ancedotal – almost casual – reporting of some pretty terrible events for a young teenager to verbatim conversations at some of her most life-critical moments. The dialogue when she tells Tom Waits of her heroin use is heart- and gut-wrenching. As a narrator she often wavers between portraying herself as a deeply knowing, self-aware, purposeful artist and a naive, awkward hippy who got lucky. Often both.

She doesn’t mind dropping names and there are some delicious anecdotes involving names you will know. I found the whole thing engaging and easy to read – it’s very well edited, evoking her musical style with its jazz base laced with all kinds of pop, blues, rap, folk inflections.

She’s both self-deprecating and arrogant – she causes a mini-riot in Germany when she misunderstands the audience and defends it with “Well, what I was supposed to do?” She often misunderstands people, and defends the hurt she causes with her status as an original, independent artist. It’s not always a good defence.

She also delights in her success, at every level, and revels in a “See? I told you” attitude that will probably annoy some people and inspire others.

Most of her insights are deeply personal with a few interesting comments about the business and the times (women in music industry, album before live debut, video, keeping image control). One place where those insights merge is near the end when she’s in Australia for the Lou Reed-curated Vivid and the Melbourne Festival in 2010 and she sees on TV a clip of the stadium at the Cox Plate singing her song Horses.

For her, it’s the realisation that her music has a life of its own, in this case a song she wrote for her newborn daughter in 1988 becoming a sporting anthem in another country many years later. And she loves it. (Daryl doesn’t get a namecheck, and it’s not mentioned that his version was also a chart hit here, nor that the music freaked out the actual horses on the day, but hey …)

My only caveat with this book would be that if you don’t already like Rickie Lee Jones, this book probably won’t change your mind. But if you know her stuff and you like her style (my hand’s up), you’ll really enjoy it.