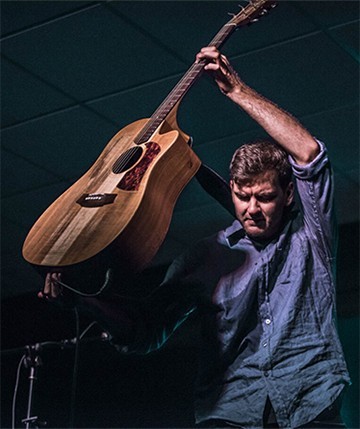 I’m finding snippets of last week’s Daniel Champagne gig in Wollongong last week bubbling back up at me.

Such an interesting musician, who’s crafted a fascinating relationship with his acoustic guitar.

Not just using it as a percussive instrument (which he does brilliantly) but also as a stage prop, almost another character on stage with him.

Right now, his version of Come As You Are won’t leave my brain. So glad I went (after it was postponed a few times).

Being a solo concert of a young man with a guitar in Wollongong, it put me in mind of two other similar events, and I think they could bear at least a passing comparison.

In May 2010, Hazel and I went to Otis, a wine bar in Wollongong (Exactly! That’s why we went!) to see Matt Corby. To that point, Matt’s claim to fame had been in 2007 as a clean cut 16 year old finishing runner up in Australian Idol. Here he was as a 20 year old shaggy headed bard with an acoustic guitar, an amp, and a formidable set of pedals, having rejected the pop idol path that had been laid out for him.

There were maybe three dozen people in the upstairs bar, pretty much filling it once we left room for the required arc of space in front of the singer. Most of the people there were friends of the venue: a very niche crowd for Wollongong.

The thing is, yes his multi-tracked live recording and looping to back himself crooning, moaning and howling – in an intimate kind of way, if that makes any sense – was astounding, over and above that what shone through was that this bloke has it. This young man has something special.

At the time, and in that context, I felt emboldened to go up and tell him what a terrific performance he’d just given and he seemed pleased and surprised. He had deliberately sought out a few venues like this to try out his more soulful, confessional singer/songwriter style on small crowds, avoiding people who already knew him.

In chatting, he asked if I was a journalist and I said I was just a punter – we’d been at the wine bar once before on a tip from a friend and I got talking to the owner and she’d told me about this gig. He seemed glad I wasn’t there to write a review (I think it’s safe to talk about, 11 years later).

Matt Corby has gone on to a stellar international performing and recording career, and I’m not a bit surprised.

Then, funnily enough in the same venue, some seven months later we saw Dan Kelly. Dan is the nephew of Paul Kelly – we had seen Dan as part of Paul’s band the previous year at the Regent Theatre in Wollongong, an excellent show (and, in fact, would see them again at Anita’s Theatre in Thirroul in 2015 – another cracking show). If Paul Kelly’s song How to Make Gravy puts a lump in your throat, the ABC /digmusic video of Paul solo with just Dan’s keening guitar will leave you sobbing.

But this was Dan doing his own lyrical, dreamlike, slightly weird songs, promoting a single off a forthcoming album. He already had a strong recording (with several bands) and performing (with Uncle Paul and his own bands) history behind him.

This was Dan Kelly in intimate mode, singing his own songs that meandered through fantastical scenarios to possibly divine some human truths. Or just sound good.

Dank Alley (as he started out) also looped himself for backing (I love this when it’s done how Matt and Dan did it: recording yourself right there, playing it back, looping it and playing live over it – not using prepared backing tracks).

The difference between Dan and Matt was that Dan was relaxed, experienced, observing the audience while he was playing – a professional, playing material from his new album in a specific environment. Matt was simultaneously more reserved (in the zone) and more intense (very personal songs), testing songs on a small audience that would appear on HIS new album the following year.

Which brings me back to Daniel Champagne. He didn’t exude star potential like Matt Corby, nor was he a laid back pro like Dan Kelly – his focus was to make his music actively engage with his audience, draw them into his musical world through his evident sheer enjoyment in playing in front of people – not surprising, post-lockdown.

By the way, Otis wine bar is no longer there. New people came in and expanded it to the rooftop Humber Bar. The lovely people from Otis moved to a rather roomier space in Globe Lane, where it is now The Prince cocktail bar. Neither venue has live music.