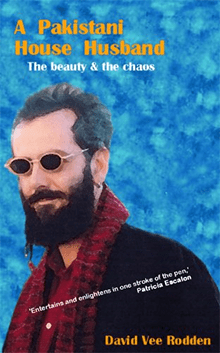 Well, this was different!

Subtitled the beauty & the chaos, it’s an account of the time David Vee Rodden spent in Pakistan when his wife Drew “scored the job as Personal Secretary to the Ambassador of Belgium to Pakistan and Afghanistan” in 2003.

This meant moving to Islamabad and becoming, for the first year at least, a house husband after 14 years working in the Australian Public Service.

I should note here that the author was a member of Idiom Flesh, a Sydney band from 1982-84 that had a bit of an impact, releasing a single and an album, making among the first independent video clips, supporting bands like The Birthday Party and Laughing Clowns, and playing regularly at some of my favourite venues, including the Trade Union Club, the Hopetoun and – of course – French’s. They also had the closing track on 1983’s first Live at the Wireless album, which remains one of my favourite records and is like a who’s who of early 80s post-punk (seriously, look it up, it’s amazing). The band is recording again and Vee has also lately become a Facebook friend, so when he mentioned this book, of course I was keen to read it.

The other bit of context to be noted is that in 2003, the US led a coalition of countries in invading Iraq, a near neighbour of Pakistan with a similarly Muslim-dominated population. Tensions were high and national affiliations important, particularly as Australia and the UK were the main original coalition partners, along with a small Polish contingent. Of perhaps less global but no less passionate interest is that Pakistan flopped badly at the 2003 World Cup of Cricket, a tournament won by Australia as they defeated India, Pakistan’s great and enduring rival. It’s an “interesting” time for a tall, white Australian to be roaming the streets of the capital Islamabad and beyond.

A Pakistani House Husband is without doubt the least “writerly” book I’ve read in a long time. There’s no point in judging it by the usual rules of theme, structure, spelling, and grammar. It’s 316 pages of mise en scene, by which I mean it’s a series of scenes in which stuff happens, without a plot, as such. The most I can say is it’s narrative non-fiction that jumps from active voice to passive and back again, from first person to second person to third person, from straightforward narrative to imagined conversations. It’s sweary, often rude, torn between sympathetic understanding and callous disregard for the Pakistani people, and almost always very, very funny.

In its course, Vee travels to most parts of the country, including sorties to Rawalpindi, Peshawar, Multan, the mountainous north and the beaches of Karachi in the south. Mostly with Drew, sometimes with others and sometimes alone, he visits stunning landscapes, appalling slums, gleaming cities and ancient villages.

From polo, cricket and football matches, to war scenes and embassy parties, he travels by car, bus, train and tonga, encountering a vast and varied range of characters that populate the country. He visits Afghanistan and makes side trips home to Sydney.

He befriends and offends Belgians, Americans, Australians, beggars, farmers, household staff, public servants, and security officials. He eats – and sometimes regrets eating – an extraordinary range of food ranging from delicious to disgusting. He drinks a great deal of alcohol in a non-alcoholic country (not without consequences), and indulges in various smokables. And he does acquire some insights into the Pakistani national character and, perhaps, his own.

It’s compelling reading, even though there’s no real plot or character development from beginning to end. For all the faults I could point out, it’s powerfully descriptive, very articulate and extremely vivid writing. In its portrayal of an Australian abroad, it sits for me somewhere between Cop This Lot (the sequel to They’re a Weird Mob, when Nino and his friends go to Italy) and the parts of Toby Zoates’ Vagabond Freak set in 1970s India and Afghanistan.

A Pakistani House Husband is not going to be everyone’s cup of chai, but for a down and dirty, laugh out loud reading experience, I can’t help but recommend it.