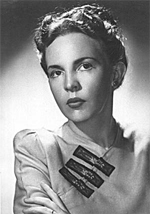 It’s probably no real surprise that it takes something non-webby to get me back to the blog. In this case, yesterday’s death of writer Ruth Park has prompted me to write.

Park’s story is one of lyrical romance and harsh reality, both in her books and her life. She famously won a 1946 newspaper prize for The Harp in the South, a highly affecting depiction of life in the slums of Surry Hills between the wars, and continued the story of the Darcy family in Poor Man’s Orange.

Park captured both the brutality of day-to-day life and the emotional bonds of family in works that drew plenty of fire, some claiming that they painted an unrealistic and cruel portrait. In fact, Park wrote about what she had observed herself when living in the area with her husband D’Arcy Niland, another chronicler of Australian life with a sharp tongue and a sharper wit.

At the time, there were plenty of people who simply did not believe Sydney had slums at all. One of the aspects of Park’s life that has always affected me greatly is that she experienced both the greatest validation and the greatest fear that a writer can feel. It is clear that publication of The Harp in the South led directly to the razing of the slum cottages bounded by Devonshire St, Belvoir St, Crown St and Elizabeth St, an undeniable good. Park herself was invited to open the public housing estate that replaced it.

As it turned out, the high-rise, high-density Northcott Place was no solution. By the ’80s it had become known as Suicide Towers. Mental health patients, recently arrived non-English speaking migrants, abused families, drug addicts and ‘repatriated’ criminals were jammed together without adequate support in a social experiment gone horribly wrong.

I have always held that this illustrates the power of literature: a work of fiction can change events in real life, not always for the better. No blame can be attached to Park for how things turned out, and the charm and emotional power of her books remains untouched. Her portrayal of the different ethnic, social and family groups that inhabited Surry Hills is filled with fun and wit, the power of love shining through the poverty and hardship.

I lived in the area for several years in the early 1980s, in shared households in Nickson St and High Holborn St. Park disguised the street names but for someone who lived there it wasn’t hard to identify the real streets and houses. Between the clear geography of the books and a couple of side trips to the Mitchell Library, I was able to mentally overlay a map of the real environment on the events of the books.

Park’s other works have also touched me at different times and in different ways. Along with Blinky Bill (Dorothy Wall), Snugglepot and Cuddlepie (May Gibbs) and The Magic Pudding (Norman Lindsay), Park’s The Muddleheaded Wombat was a local touchstone for an immigrant child puzzled by Australia’s fixation with English literature for children. No offence to Enid Blyton, but I’ll take Mouse, Tabby Cat and their unwittingly naughty mate any day: “treely ruly”.

Then there’s Playing Beatie Bow, Park’s multiple award-winning story of a teenager who steps back into 19th century Sydney, in an area called The Rocks that is still the historical heart of the city. Unafraid to portray family difficulties in the present and the past, and the search for love that shifts from parental to romantic, Park captured perfectly the tension between past and present, rich and poor, rulers and ruled that has coloured Sydney so richly in its short history. The magic of the events portrayed is closely balanced by the meticulous depiction of the physical environment. The international awards for this book were richly deserved.

Swords and Crowns and Rings won Park the Miles Franklin Prize in 1977, still the most significant prize for fiction in Australia. It’s a marvellously affecting story of life in Australia before and during the Great Depression, as seen through the lives of the dwarf Jackie Hanna and his childhood sweetheart Cushie Moy. It is essentially a large scale romance designed to tug on the heart-strings, but Ruth Park can’t write about people without writing about their social context. If you want to know where some of Australians’ more distinctive world views come from, this book will go a long way to educating you.

One of Park’s lesser known books is also a personal treasure for me. In 1973, Park published The Companion Guide to Sydney, republished in 2003 as Ruth Park’s Sydney. I came across this book in the 1990s when I was researching my (still uncompleted) Sydney Literary Pub Crawl, a perambulatory and lubricated association between noted writers of (and about) Sydney and pubs in The Rocks (totally inspired by the excellent Dublin Literary Pub Crawl). Park’s book was clearly way ahead of me, a more sedate stroll through modern Sydney pointing out historical associations that might otherwise never be noticed. It is a beautifully compact and practical guide, unique as far as I’m aware. If I do ever complete the Sydney Crawl, I think I might dedicate it to Park.

Among her many other works, the standouts for me are Park’s autobiographies A Fence Around the Cuckoo and Fishing in the Styx. Her voice in these works is strong and determined, a woman carving out a role for herself as a professional writer at a time when not many dared. The books are filled with humour, sadness and passion as well as unflinching portraits of life in New Zealand and Australia in the first half of the 20th century.

Ruth Park has been a beacon of Australian literature for so long in my life, I’m not sure I can properly process the fact that she is gone. And, of course, in a very real sense, she is as much with me right now as she has ever been. Along with Kylie Tennant, Christina Stead and Eleanor Dark, I believe Ruth Park remains completely underestimated as a serious writer. Each of them captured aspects of Australian life in books that brought together an understanding of love, family, faith and politics informed by their own experiences and reaching out to readers of all types. They certainly reach out to me. They are writers whose sheer craft most people can only ever aspire to emulate.

Hazel once wrote to Jessica Mitford explaining why she liked Mitford’s work so much, and received a handwritten reply in which her idol thanked her for her correspondence saying it was “exactly the kind of thing that makes the arduous task of writing worthwhile”.

I wish I’d done that for Ruth Park.