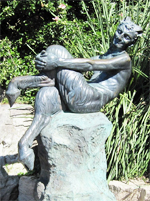 I had a lovely trip to Sydney with my family this past weekend.

The main reason for the trip was to allow Hazel and I to go and see The Giacomo Variations, thanks to Christmas present tickets from Hazel’s sister Aileen, an experience I wrote about here.

I also had the opportunity to catch up with a little slice of Sydney history that is very special to me.

We had the kids with us so we also did some fun things with them. We spent a few hours at Sydney Wildlife World, which is an extraordinary experience in itself but was even further enhanced by having enormous LEGO models sprinkled throughout. The whole place is quite wonderful, with sympathetic, sensitive and very educational displays of Australian wildlife from ants to Rex the 5 metre saltwater crocodile (very impressive, as is his knowledgeable and thoroughly charming young keeper). Who knew that the cassowary is a keystone species? And, of course, Cormac and Augusta were thoroughly tickled by the giant LEGO displays built from tens of thousands of the same colourful bricks they play with at home.

We also had a ball at Luna Park, took the ferry back to Circular Quay the long way round the harbour and went out to dinner at Bill & Toni’s with friends. I even managed to squeeze in  a Sydney Festival talk by Larrikin Records and Folkways founder Warren Faheycalled Postcode 2011: The Good Old Bad Old Days.

A special diversion that Hazel kept as a surprise was a visit to the installation by Architects of the Air on the Sydney Opera House forecourt called Mirazozo. This was a quite magical structure made of coloured panels of a translucent plastic material – a luminarium – through which you could walk while soothing music played. It’s perhaps best explained by the photos I posted on flickr.

However, while we had a bit of time to kill before entering Mirazozo, I took Cormac and Augie to see the statue called The Satyr, which sits just inside the main gate to the Royal Botanic Gardens and Domain as you enter from the Opera House end.

The Satyr was first sculpted in clay by Frank Lynch (known as Guy) in 1924. He used his younger brother Joseph as the model, and at the time the result was variously praised as genius and damned as paganism.

Joe was himself an artist who sketched in black and white, well enough to have worked for Punch in Melbourne in 1925 where he met Kenneth Slessor before moving to Sydney to join Smith’s Weekly in 1926 as the youngest staff member. Joe was also a wild man, a bohemian with strong political views.

On 14 May 1927, Joe Lynch stepped, fell or jumped off the end of the Manly ferry [ update – it was the Mosman bound ferry Kiandra, as pointed out in comment ] as it crossed Sydney Harbour, not far from Fort Denison. He was certainly drunk, and reputedly fought off would-be rescuers. He was 30 years old.

Guy Lynch was naturally devastated at the death of his younger brother, described as a “looser and wilder version” of him, but he eventually went on to study, sculpt and exhibit in London, Paris and back in Sydney.  Also in 1927, Slessor became a writer at Smith’s Weekly, rising to Editor by 1935 and briefly Editor-in-Chief in 1939, when he resigned to take up a post as war correspondent.

1939 was also the year Slessor published the poem “Five Bells”, his elegy for Joe Lynch and one of the truly great Australian poems. To my mind, Slessor is the greatest poet Australia has yet produced.

Time that is moved by little fidget wheels
Is not my time, the flood that does not flow.
Between the double and the single bell
Of a ship’s hour, between a round of bells
From the dark warship riding there below,
I have lived many lives, and this one life
Of Joe, long dead, who lives between five bells.

Guy Lynch died in 1967, and in 1977 his widow Marjorie paid for The Satyr to be cast in bronze and its owners, The Art Gallery of NSW, allowed it to be placed in the Gardens, within easy reach of the Harbour’s “waves with diamond quills and combs of light, That arched their mackerel-backs and smacked the sand“. 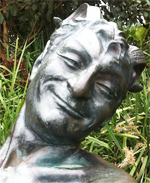 While we were there, a couple stopped to look at the statue. The man draped his hat on Joe’s horns and leaned on his shoulder while the woman took photos. I asked them if they knew the story behind the sculpture but they had just been drawn to its appearance.

When I told them, the man hoped he had not offended, but I assured them that no-one would have liked their antics more than Joe himself.

If you get the chance, stop and take a look at The Satyr. Look at the broadness of the grin, the relaxed and satisfied demeanour of one who had passion and talent to burn, died too young and inspired a marvellous poem.

2 thoughts on “the satyr”