I came across this clipping of a review from 1984, and it brought back a few memories.

After stints with the (then) NSW Theatre of the Deaf in 1982 and the Marionette Theatre of Australia in 1983, I was Sydney-based and an experienced theatre-in-education performer when TIE was at its height as a crucible of meaningful theatre for young people performed in schools.

There was quite a lot of activity around the country, TIE companies all over the place fostered some great writing, acting and directing talent. I auditioned for a few, including the Adelaide-based Magpie Theatre, one I really wanted.

It involved showing my stuff to Artistic Director Geoffrey Rush, a Lecoq alumnus. He really liked my mime work (a routine based on one by Michael Freeland from my TUK days in Tasmania), and I made it to the short list but ultimately that job went to someone else.

I also auditioned for mainstream theatre, including for the role of Mr Tall in a big budget Mr Men musical.

That was a classic cattle call in the Regent Theatre, lots of hopefuls lined up with their photo portfolios and audition pieces ready. I breezed through the acting part with a Tennessee Williams piece (the opening to The Glass Menagerie, which I’d seen Chris Harvey perform to great effect) and the good old seven ages of man speech from As You Like It, and was asked to stay for the singing part.

At this stage of the process, what had been about 40 people auditioning for this role became 10. The odds were looking good when the singing section came. I played it safe and did (with a borrowed guitar, perfectly tuned) a James Taylor song that was within my limited range and still had a nice dramatic, emotional part (In My Mind I’m Going to California). I was asked to stay for the dancing part.

Now, I hadn’t claimed to be a proficient dancer in my CV but I hadn’t said I was hopeless, either. I may have mentioned that I had taken ballet classes with Gerard Sibbritt of Sadlers Wells fame while at the NSW Theatre of the Deaf. In any case, for the Mr Men audition, their choreographer got up on stage with me and said something like “We’ll do a two-step, shuffle, shuffle, kick left, kick right and step down forward, OK?” I must have looked as blank as I felt, prompting him to say, “It’s OK, just follow me.”

Easier said than done, Mr Slim White Slacks. I didn’t actually fall over, but I didn’t actually get any of it right, either. The calls of “Thank you! We’ll let you know!” that rang out from the darkened seats were loud and very clear. The choreographer smiled kindly at me and gestured toward the exit as he turned away.

Anyway, I was a lot more comfortable auditioning for TIE companies, and one that came up was for a company called Bread & Circus, based in Wollongong. The audition was held in the small rehearsal space the company had in Stuart Park, so I took the red rattler south. The Director, Bob Doyle, met me at North Wollongong station and we walked to the space they shared with local graphic designers Redback (who turned out to be the creators of posters that formed a movement, beautiful and dynamic enough to warrant archiving at the National Gallery).

I can’t remember what I did for the audition, but I do recall getting on really well with Bob and us  talking a great deal about what TIE meant and could do in the right hands. Bob had in mind to do a show on a theme of vandalism and the failure of the system to deal with the young people involved. It was focused on the troubled youth of places like Dapto, and resonated with me, coming from Claremont as I did.

Bob had written an outline and some scenes and wanted to group devise the rest with a cast of three. I went back to Sydney and within a few days, Bob rang me to say I had the part. It was a six month contract and I packed most of my belongings, said goodbye to my Surry Hills share house and found a place to rent in Corrimal, nestled between the escarpment and the beach, a few train stops from the company space.

My fellow cast members were Ian Spence and Judith Knapp. While we all played multiple characters, Ian’s main role was Germ, the gawky innocent who fell in with a bad crowd, Judith played Tracy the girl who had her own problems, and may main role was Ratso, representing the aforementioned bad crowd. Complete with black leather jacket, I tried hard not to channel Marlon Brando and James Dean and focus more on the Claremont bullies I’d gown up with. Importantly, we had the opportunity to sit and talk with kids from schools and detention centres in and around Dapto, and we did a lot of work on incorporating their very real stories into our characters. It’s what saved us from sliding into caricature. 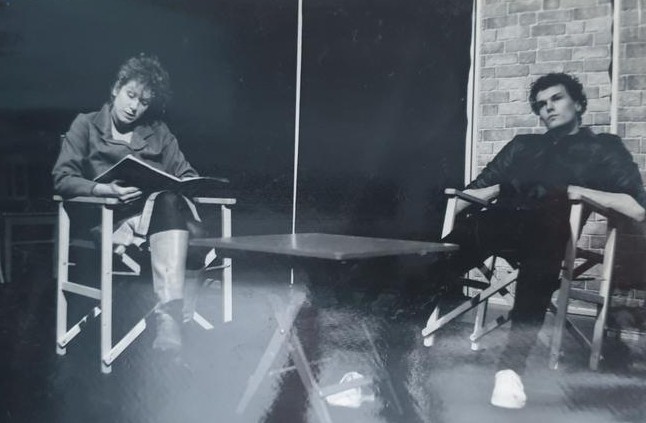 One of my other roles was Ratso’s father, a used car salesman, and here I did have the opportunity to slide into caricature. While the domestic scenes were played hard and real, I had a showstopper scene in which Dad is filming a TV commercial. This was at the height of the 80s late night TV ads that would scream “And that’s not all!!” and “Up the Windsor Road!!” from the screen. For this scene, I had the stage to myself in a short sleeved powder blue safari suit as I worked through a TV ad script, with an offscreen director’s voice stopping me and having me restart with “More energy!” until I was a screaming, sweating, spitting, shaking mess, with a final “Cut! Got it.” from the director. The scene always got a lot of laughs from the school performances, and I had the pleasure of going completely over the top for a performance we had at the Young People’s Theatre Festival at Carlton’s Shopfront Theatre that year. The more excessive my performance, the more the scene underpinned where Dad’s abusive behaviour came from.

We also had a number of post-performance sessions with high school students and troubled dropouts. These kids knew we were actors but they opened up, prompted by what they saw as our understanding of their circumstances. There were tears, and there was anger, and there was relief that maybe someone understood and things might change. It’s one of the most powerful aspects of TIE and community theatre, that we can be agents of understanding and change. I don’t know whether Smash! or any other shows I’ve been in have actually changed anyone’s lives but I’d like to think they might have.

After my time with Bread & Circus was up, I headed back to Sydney and before long was picked up again by the MTA to do some regional touring of a show with anti-pollution and ecology theme. Funnily enough, my co-performer was Judith. We’d gelled well at Bread & Circus, but the MTA tour was a bit of a horror. It can be tough, when it’s just two performers in a van travelling from town to town on a fairly rigorous schedule aimed at two or three shows a day, five days a week, a long way from home. I didn’t behave particularly well, and I doubt that Redrobe would ever want to work with me again.

As a side note, in 2006 when Hazel and I lived in Lilyfield, had our second child and were looking for a house to buy, we’d take weekend trips to regions outside the Sydney metro to check out affordable possibilities, Sydney itself having become prohibitively expensive. We looked at several places around Wollongong, and it was a stroke of luck that we stumbled on a house in Corrimal that satisfied almost all our needs. Recently renovated, large, all mod cons, good sized backyard, lovely neighbours on one side and a rarely visited Russian Orthodox church on the other, near schools and shops and public transport, it wasn’t being advertised but somehow we had a walkthrough, made an offer and it was ours. Just a few hundred metres from the house I rented in 1984 while with Bread & Circus, it’s been our home ever since.

Alt text for image of clipping:

The students in the play have the potential to become professionals in what they do best Germ is a football player; Ratso is a sprinter and Tracey is an Artist; but are hindered because of their lack of self-esteem and lack of parental guidance and interest in what they themselves do best.

This lack of guidance and interest shown by the parents, teachers and society in general pushes these students to extreme acts of violence, eg. the smashing of a phone box.

The students see this act of violence as a type of release for their pentup anger and aggression against society. The play involves audience participation, especially in the school scene. The audience can relate to the problems that these characters are portraying because they are directed towards their age groups (12-16) and includes many of the problems that they can actually go through.

This play is a realistic portrayal of teenage tensions, aggressions and outcomes.