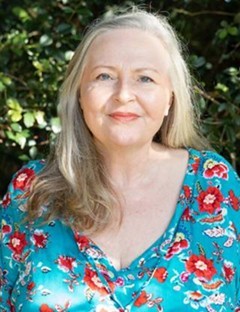 Having recently finished reading The Last of the Apple Blossom, by Mary-Lou Stephens, I decided to write a review.

This set me to thinking and writing about my friendship with Mary-Lou as a preamble to the review and, in my usual long winded way, things got a little out of hand.

So as not to get in the way of the review itself, I’ve made this a separate post.

Mary-Lou and I go way back.

We first met when we were both cast in a play directed by my flatmate Chris Harvey in 1979. Chris had tweaked Joseph Heller’s satirical anti-war play We Bombed in New Haven to be more localised and cast a bunch of young actors. I had just left the TCAE – at the college’s request (let’s not get into that) – and Chris rather kindly gave me a leading role to take my mind off things. It was just the tonic I needed and I loved working on it.

I suppose it was a pretty typical youth theatre production but it felt very grown-up. Also among the cast was Mary Louise Thorp, then known as Cabbage, who turned out to be the sister of Katy Thorp, with whom I’d been in a couple of classes at TCAE. We hit it off – she was loud and funny and smart and very attractive. It might have gone somewhere if I hadn’t been so stupid.

Not long after We Bombed in New Norfolk, I joined the public service and became an Australian citizen for the purpose. I scored a job with the Australian Tax Office and ended up in the Recovery section, in a small unit that acquired the nickname The Black Hole, for reasons you might be able to imagine. This turned out to be where Mary-Lou was also working – my word, they were fun days. Mary-Lou introduced me to a new world, taking me to nightclubs where we danced ourselves silly to Flowers and Adam Ant. The fact that I was all knees and elbows didn’t seem to matter. Mary-Lou was also playing bass in a band or two – some great nights at the Red Lion ensued.

In October 1980, Mary-Lou performed in a (pretty amazing) production of Spring Awakening that featured lots of other local young actors. Several took part in a series of clowning workshops run by another of the cast, Adam Newcombe, over the summer. Adam and I had met when he was with the Tasmanian Puppet Theatre and I was doing Dracula impersonations for a movie promotion, and he suggested I take part in the workshop. We put on a public show at the end of it all, where Michael Freeland, a local mime artist who had tasted some international success, liked what he saw and suggested we should let him help us develop a show and take it on the road to local schools. Really!

Even more surprising, five of us did just that (Adam, Penny McDonald, David Pidd, Mary-Lou and me) and we formed TUK, stepping into the then burgeoning theatre-in-education scene. The show was a skit-based mix of mime, puppetry and music, which went down a treat with infant and primary schools. 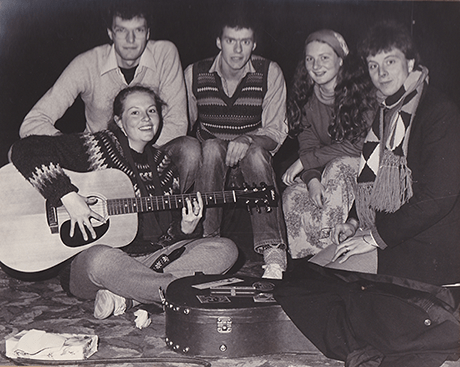 We roamed all over Tasmania in an old Commer van and for about 7 months we had a ball, although inevitably the effort and closeness became tiring and there were some tense moments. We also realised our business plan had not accounted for how small Tasmania is and that we would be competing with other theatre, puppetry, dance and music companies working the same market. By August 1981, TUK had reached its limit and we broke up.

Mary-Lou went to Melbourne to study at the Victorian College of the Arts and play in more bands, while I went to the Netherlands with my father to visit family after my mother died. On the way back I detoured to Sydney, hooked up with some other Tasmanians studying at the Drama Studio and NIDA and went to a few auditions.

TIE was a huge growth area in NSW and, somewhat to my surprise, I scored a contract with the NSW Theatre of the Deaf. All that mime work had paid off! I worked with one other hearing actor and three or four deaf actors (depending on the show) for a year and we were busy! Three shows a day, five days a week, all across Sydney, several regional tours … it was full on. I went on to work with several other TIE companies based in Sydney, Wollongong and Newcastle over the next few years.

I didn’t have a lot of contact with Mary-Lou through those years, but occasionally our paths would cross in Sydney or Hobart. One memorable occasion was when Chain of Hearts, her nearly all-female country band, launched their album at Kinsela’s in Sydney. I still have CDs of two of the band’s albums and they stack up very well today.

After a stint in Newcastle with Freewheels Theatre, I met Hazel (she interviewed the company for ABC Radio) and decided to stay, working in youth theatre, backstage work, as the “Artistic Director” of Fanny’s nightclub, starting a local deaf theatre troupe, teaching aspiring models how to catwalk, running movement classes with young adults with intellectual disability, saturating the local TV ad market – what fun I had.

Hazel and I moved to Sydney in 1987, where we both worked for an information agency, HWW, which is where I learned both to write and to understand the new-fangled info tech. We occasionally saw Mary-Lou, always a fun catchup.

Mary-Lou moved to Queensland and became a radio presenter and music director, while I moved through several jobs: managing an information service for people with disabilities, getting more tech chops with advocacy group People with Disabilities (NSW) and eventually striking out as a freelance web designer / developer.

Hazel and I moved from Woollahra to Bronte to Lilyfield and, when we had children and wanted to buy a house, to Corrimal in the northern suburbs of Wollongong. Mary-Lou came to visit a couple of times, published a memoir Sex, Drugs and Meditation in 2013 (which I loved reading) and it’s not that long ago that she brought her husband Ken for a lovely long lunch at Bulli beach. Social media helps us to keep in touch.

After 40+ plus years, Mary-Lou remains one of my oldest friends. And this year, she published her first novel, The Last of the Apple Blossom.