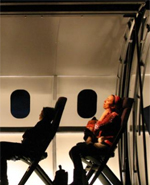 Hazel and I went to Sydney to see Lipsynch, the latest theatrical work by Robert Lepage‘s company Ex Machina to come to Australia.

Canadian Lepage has acquired a reputation as a global theatre practitioner, one who succeeds in creating theatre that is meaningful, modern and international.

His projects bring together actors, writers, designers and technicians from around the world, and give them the responsibility and the freedom to create great theatre.

This production of Lipsynch fits that bill.

After eight and a half hours that was never less than rivetting, I found myself rising spontaneously to my feet with tears in my eyes to applaud loud and long.

As the performers and techs lined up on stage, the actor in me envied them for their participation in theatre of such ambition, such scope, such technique.

Lipsynch plays out in nine parts: nine stories that weave in and out of each other, overlapping in time, location and language to create an over-arching narrative sparked by the death of a young Nicaraguan woman. In the telling of her story and those of her son and seven other main characters, Lipsynch explores the concept of voice and its role in shaping the human condition.

Ultimately, my full engagement with a theatrical production is usually informed by my impression of the actors. If the performers convince me I’ll forgive a whole bunch of minor stage sins, but if the actors don’t carry me away it doesn’t matter if the writing, direction, lighting, sound, set design or special effects are stupendous, it will leave me flat.

Lipsynch features nine actors of great skill and commitment. Each dominates one section as the title character, while playing one or more secondary roles in other sections plus a handful of walk-on cameo roles.

The realisations of the main characters are multi-layered, deeply personal, three dimensional portraits that develop as they age in the story. The actors’ ability to sustain performances of such intensity over such a long period of stage time is a tribute to their skill.

The secondary characters are also mostly convincing but the playing of some of the minor roles tended too much toward cartooning. Granted, the audience seemed to appreciate the opportunity to guffaw, and I have to assume it was deliberate since they’re the same actors who do such wonderful work in their main roles, but it sometimes seemed a bit out of place and distracting.

The actors are surrounded by ambitious sets in which the clever mechanics of advanced stage design are on display, ingenious devices evoking the interior and exterior of an aeroplane, a film set, some trains, some cars, a radio studio, a book shop and any number of living rooms, offices, cafés, restaurants and bars.

The entire production design embraces new media and technology and provides its characters with devices that are increasingly commonplace in our daily lives: mobile phones, computer screens, video recorders.

“The voice is internal machinery that finds its ultimate expression outside the body but to examine it and try to understand it properly, one needs to pull away from the visual stimuli for a while and go where the voice is ‘seated’. As in our other shows, the form and structure of Lipsynch is baroque and unconstrained but this time the characters seem to have emerged from a place that is more profound.”

That place is not a happy place, although one not without hope. Lipsynch touches on some of the more devastating aspects of the modern human experience. The trafficking of women for sexual exploitation, child abuse, paedophilia, incest and rape are hardly hallmarks of an advanced civilisation.

Alzheimer’s, mental illness and brain tumours also come up in Lipsynch. Some of what the actors have to portray must be psychologically draining if they are to sustain conviction and not descend into caricature.

Many of these issues could be seen to be major concerns for humanity going into the 21st century. That Lipsynch is set variously in Canada, Germany, Nicaragua, England, USA and the Canary Islands between the mid-1970s and the present gives you some further idea of the scope of  this remarkable theatre project.

I should also say that there are a lot of laughs in this show. I found some of the deliberately “comic” moments to be a little constructed, but the audience was more than willing to go with anything that was funny, possibly as a form of nervous relief from some of the more serious stuff.

Personally, I derived more pleasure from some of the more quietly amusing aspects of Lipsynch: a clever plot twist here, a sly play on words there, a cinematic or literary reference slipped in.

All in all, the lengthy running time of the whole show was in no way a burden. It certainly worked for the story, and gave each performer ample time to take the spotlight.

That strategy will only work if every actor is capable of  carrying the story and themes forward with conviction and commitment.

The Lipsynch cast certainly does that.