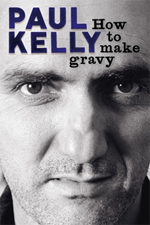 How to Make Gravy is a memoir by Paul Kelly, sometimes called Australia’s greatest living songwriter, a people’s poet, or our master songsmith.

If you don’t like reading about grown men getting emotional, then don’t read any further. But then you probably won’t like Kelly’s book either. Or his songs.

First, some background about the book. In 2004, Kelly had been invited to play some shows in Melbourne in the Spiegeltent, a construction of wood, canvas and mirrors that holds about 300 people.

He came up with the idea of singing 100 of his songs over four nights, in alphabetical order, 25 songs each night. He searched his catalogue of 300+ songs and chose the ones that he thought would sustain both his own and the audience’s interest the best.

He added some storytelling about and around the songs, invited guests to join him on stage and the shows were a great success. He went on to perform them in different cities and countries, performances were recorded to form a CD collection and he thought about a book to go with them. This is the result.

It’s a marvellous device that sets Kelly off on seemingly unconnected anecdotes about his life and work. The end result is surprisingly cohesive and comprehensive, in just the way many of his best songs are.

Paul Kelly was born in Adelaide in 1955 (four years before me) and gave his first public performance in 1974 at a folk club in Salamanca Place, Hobart. I grew up in Hobart and gave my first public performances busking at Salamanca Place, four years after Kelly was there. I went on to play folk at the same St Ives pub where it turns out Kelly had been listening to jazz a few years before. The importance of this for me is not that I did what Kelly did – without knowing until now that he had done that – but that we both lived and started performing at a time and place where that was not only feasible, but a natural thing to do.

If you could play a guitar and hold a tune, well of course you’d get up and perform. Of course you’d write your own songs, and naturally you’d play them in public.

Throughout How to Make Gravy, Kelly emphasises that his career has never been based on a master plan. He doesn’t even call what he does a craft, because that term implies you know what you’re doing, and he’s never approached songwriting that way. His songs are not built as careful structures, they’re stories based on scraps of overheard conversations, dim memories and made-up characters that he can’t shake until he gets them into a song.

This is very familiar territory for me. That he’s a writer of fiction set to music has sometimes led to misunderstandings, something with which I can also identify.

In fact, I think a significant number of people our age who now lead steady, settled lives making a decent living and raising families around Australia came through a period where they followed paths they could never have guessed would appear. The ’60s and ’70s were times you could chance your arm without a safety net and see what happened. Not everyone came through unscathed, and some not at all, but as I sit here in my nice house south of Sydney and read of Kelly’s experiences that ended up providing him with various wives, children, addictions, awards, collaborators, friends and the inspiration for a catalogue of sometimes astonishingly beautiful songs, it puts into context for me how lucky I have been and am now.

One thing that How to Make Gravy makes clear is that Kelly is no dunce, that’s for sure. Plenty of people start reading Whitman, Sartre and Nietzsche to gain some understanding of the world, but not many move on to working with people like Archie Roach and Mandawuy Yunupingu, or visit asylum seekers locked up in detention camps  to gain some understanding of the country.  Lots of people listen to the Beatles, the Beach Boys and Frank Sinatra but not many come away with a deep understanding of lyrical structure, melodic variation and performance skills the way Kelly has.

And, of course, he can write. Not just songs, but prose: dialogue, description, mood are particular strengths. I had to read some sections out loud to my wife because they were so funny, or so sad, or so wise and each time I realised how well written this book is. I reckon I could read the whole thing out loud and hold an audience (why yes, Mr Kelly, I am available). I also found myself choking up when I read some of it out loud. And sometimes when I just read to myself.

A highlight for me is the role of Dan Kelly in this book. Dan is his nephew and an established singer, songwriter and guitarist in his own right. He’s also a key member of Paul’s band, support network and family. There’s no sense of “wacky families” in this, nor of “I made him what he is”. Having seen Dan perform with Paul’s band a few years ago, and then more recently solo at a Wollongong wine bar, it’s obvious that he is a precocious talent in his own right. Paul is clearly glad that Dan is an equal, a colleague and good friend. You can see how they work together on this clip of the song “How to Make Gravy“.

Maybe all of this just comes down to, I get Paul Kelly, and he gets me. He is of my time, of my place, of my generation. And his book is great.